Four Stories Are Better Than Five 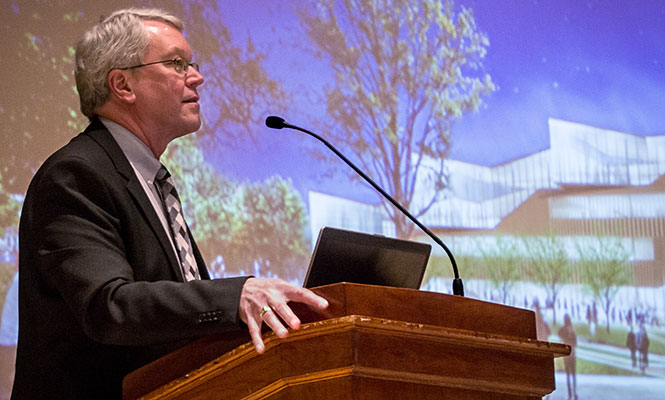 “Design is a process and it continues over a period of time,” said Douglas Steidl, dean of the College of Architecture and Environmental Design, who opened the presentation.

Because it has been almost a year since the competition searching for a design for the new CAED facility concluded, there have been some alterations made from the original winning Weiss/Manfredi design. The most notable of the changes was the elimination of an entire story of the building. The square footage of the building has decreased from approximately 120,000 square feet to 107,000 square feet.

“Four stories are better than five,” Steidl said in regard to the size reduction. He said that most of the square footage reductions came from reducing the size of the corridors, which he said was useless space in most instances.

By focusing on reductions in the corridors, the design team was able to maintain the integrity of the initial winning design’s DNA, Weiss said.

The building is set to connect downtown Kent and the university’s campus along with unifying the architecture, environmental design, interior design and construction management programs under one roof, Weiss said.

Weiss also mentioned the desire to create an open space in which students and professors from varying disciplines are able to see each other constantly. The design architects feel students working in the new facility will be able to utilize inspiration gained from an unimpeded peripheral awareness only possible through such openness.

Although changes have been made, all of those working on the project, including Manfredi, seem to be optimistic about the facility’s potential.

“If you don’t have a strong idea, it can never improve,” Manfredi said.

The winning design has morphed into a more effective and efficient design over the course of modifying it due to various constraints such as budget, sustainability and programming, Steidl said.

Early sketches included a “green” roof for the facility, which would implement a roof with living plants. However, the reality of the green roof, which a few audience members inquired about, remains uncertain due to budget constraints.

The ongoing design process that Weiss calls “a huge adventure and an honor,” continues as current plans indicate the building will be ready in July 2016.