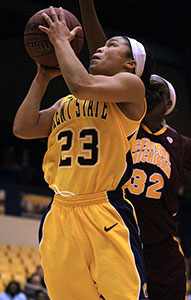 Kent State [3-15, 0-7 MAC] will brave the vortex and hit the road to travel to Illinois and take on the Northern Illinois Huskies [7-10, 3-4 MAC] Wednesday night in pursuit of their first conference win.

The Flashes fell 72-62 in their last contest on Saturday afternoon at Miami. Sophomore guard Rachel Mendelsohn came close to setting new career marks, and was the leading scorer for the Flashes after finishing the game with 19 points.

Kent State showed resilience in that game at one point being down 20 in the second half; the team kept fighting and cut the Red Hawks deficit in half. The Flashes only committed 15 turnovers in the contest and finished the game with 14 steals. But the early foul trouble and poor shooting proved to be too much.

“I thought that we hurt ourselves early in the game by having some early fouls,” said Kent State head coach Danielle O’Banion on the Flashes iHeartRadio network. “That combined with us missing layups that were just no-brainer bunnies I thought that came back to hurt us along with our shot selection. We paid for us making some tough decisions in transition.”

Northern Illinois is coming off a 57-44 loss at Bowling Green on Sunday afternoon in what was a defensive showcase. The two teams entered the contest as the Mid-American Conference’s two top defensive teams. Northern Illinois has gotten the defensive recognition by only allowing 62 points per game.

Both the Flashes and the Huskies are having their struggles in conference play. Kent State is still searching for its first conference win. Northern Illinois has lost three of their last four conference games including a 63-52 loss at home against Buffalo [Jan.23]. The Flashes are currently in last place in the women’s MAC East division. The Huskies are in fifth in the West division, above only Eastern Michigan.

Both teams will look to turn things around when they clash Wednesday night. Tip-off is scheduled for 7 p.m.