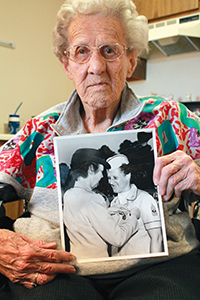 Helen Kolp, World War II first sergeant in the Women's Army Corps, holds a photograph of herself receiving the Department of Army Commendation Medal at Fort McClellan in 1963. Photo by Kristi Garabrandt.

When Japan attacked Pearl Harbor on Dec. 7, 1941, Helen Kolp, 90, was a senior at North Canton High School. She wanted to enlist in the Women’s Army Corps but was too young.

“You had to be 21 to enlist unless you had your parents’ consent, which I didn’t,” Kolp said.

Instead, Kolp enrolled for a quarter at Kent State Stark where she studied history and photography.

Two years later, Kolp enlisted and took a job near New York City, driving truckloads of replacement soldiers to and from the docks, and eventually becoming supply sergeant. She said her fondest memory of her time in New York was being in Times Square on V-E Day, May 8, 1945.

“It was quite a celebration. Everybody was everyone’s friend,” Kolp said. “They didn’t care who you were, they would kiss you. We were so young.”

After New York, Kolp was stationed in France and Germany for five years as a sergeant major, processing paperwork and shutting down staging areas after the war’s end. While abroad, Kolp said she played on the WAC basketball team, shooting the winning shot in the European WAC Championship.

In the late 1940s, Kolp returned to the United States to complete advance training and administrative work at Fort Bragg in North Carolina.

She left the Women’s Army Corps in 1963. In October of that year, she received the “Army Commendation Medal” while stationed at Fort McClellan in Alabama.

Kolp said she feels the Women’s Army Corps was a big part of the war effort. She tries to stay in touch with the few surviving members of her WAC team, attending reunions when she can.

“At 90, it’s just getting difficult to do and there’s less and less of us,” she said. “I miss those years and the people.”