Starstruck on the Rathskeller stage 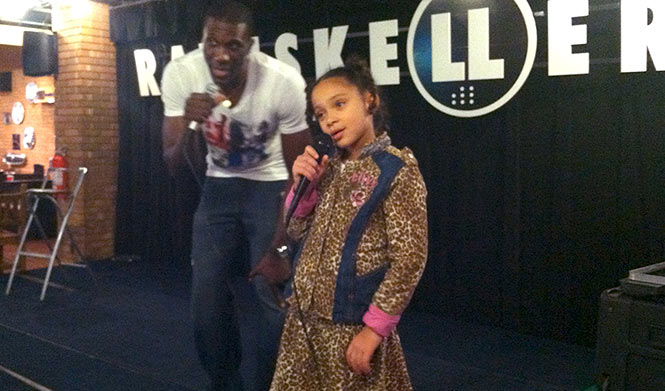 Bradley Webster of Barberton performs with cousin Maryah in the Rathskeller Nov. 22, 2013. Webster was visiting Kent State for his sister’s graduation ceremony and his family was dining at Quaker Steak when they came across the karaoke night.

Most nights, people in Quaker Steak & Lube slurp out of twisty straws and lick chicken-wing sauce off their fingers. Together, they laugh, and the servers exchange their food for plastic table numbers.

On Fridays from 8 to 10 p.m., there is all of that, plus one more thing: karaoke on the Rathskeller stage.

“It’s a nice addition when you go down in there into Quaker Steak to just enhance your evening,” said Jennifer Gunnoe, associate director of the Center for Student Involvement.

Karaoke is put together by Kent Student Center Programming, which is part of CSI.

Nancy Wilson, sophomore visual communication design major, said she knew about karaoke but never got a chance to participate until Nov. 22, when she sang “Before He Cheats” by Carrie Underwood.

“Singing is like my life, so I sing every chance I get,” she said.

She has sang competitively since the age of 7. Wilson said she placed fourth in “Ohio Idol” two years ago. She also had a front-of-the-line pass for “The X Factor.”

A front-of-the-line pass is when scouts from “The X Factor” and other shows stand in line, disguising themselves as other contestants, and they find talented singers and bring them to the front of the line, Wilson said.

Wilson said she has sang karaoke at other locations in Kent and in her hometown of Medina.

He said his friends, who he sang in front of in private, suggested that he go onstage. He sang “Joy to the World” by Three Dog Night, which he said he knows well and felt comfortable singing.

“It was very interesting, but it wasn’t that bad though,” Beier said. “It’s just different having people looking right at you on the stage as opposed to maybe just walking by or something.”

Bradley Webster of Barberton said he came to Kent State for his sister’s graduation ceremony. He and his family ate at Quaker Steak, and he performed karaoke with his cousin Maryah.

He said he and Maryah have performed karaoke at different bars.

“Me and Maryah are usually the stars of the show,” he said. “She brings the bite, and I bring the grrr. So we’re a one-two punch.”

Webster said he likes Kent State as well as the stage and music selection in the Rathskeller.

“Students should know that it’s a great time, great food,” Webster said. “Come and relax, and look at people have fun onstage, just like me and Maryah have.”