Some Americans should start getting the first Covid-19 vaccine today. It will take months before everyday people get the shots 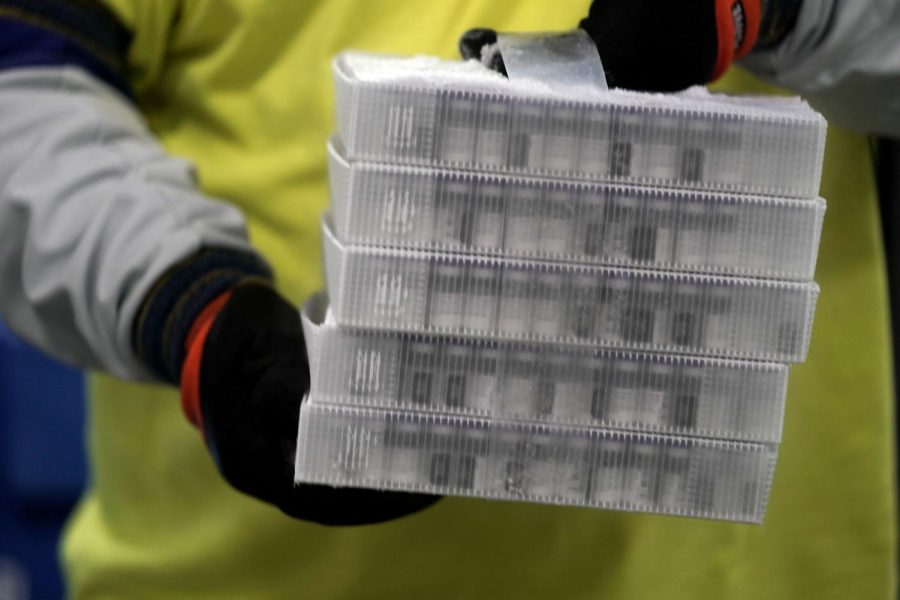 Vials in boxes containing the Pfizer-BioNTech Covid-19 vaccine are prepared to be shipped at the Pfizer Global Supply Kalamazoo manufacturing plant in Kalamazoo, Michigan on December 13, 2020. - The Pfizer-BioNTech Covid-19 vaccine was to begin leaving the company's Michigan factory on Sunday, ready to be injected into the arms of millions of the most vulnerable Americans as the global death toll topped 1.6 million.

(CNN) — Some Americans should receive the first Covid-19 vaccine as soon as Monday, providing a glimmer of hope nearly a year into the worsening pandemic.

First in line will be two groups considered to be exceptionally high risk — health care workers and residents of long-term care facilities such as nursing homes.

The groups are part of what federal health officials call Phase 1a of the vaccine distribution plan. Together they add up to about 24 million people.

Residents of long-term care facilities have been especially vulnerable, accounting for about 40% of coronavirus deaths in the US.

With cases soaring across the country, protecting the health of doctors and nurses is crucial. More than 240,000 health care workers have been infected with coronavirus and nearly 900 have died, according to the CDC.

But state health officials and governors across the nation may not receive enough vaccines in the initial shipments for the top priority groups.

States will have to prioritize who should get the vaccine first. And limited first shipments will ultimately affect when members of other groups down the line roll up their sleeves, leaving timetables fraught with uncertainly.

Essential workers could be on deck

Experts advising the CDC have recommended that the next group to receive the vaccine — perhaps in January — include essential workers, such as emergency medical technicians and police officers. Also included are older adults living in congregate settings or crowded conditions.

The first part of the four-phase vaccine rollout might include people of all ages with underlying conditions such as diabetes and kidney disease considered to be at a higher risk of dying or getting severely ill from Covid-19.

It’s possible that the US will still be in the first phase of vaccination in March given the sheer numbers of people involved. Anyone healthy and under 65 who is not an essential or a high-risk worker should not expect to get vaccinated until later.

The timetable will depend on the number of vaccines to get FDA approval and when that happens — and, of course, how many doses are available. The vaccine requires two doses: one to prime the body, and then a few weeks later, a second shot to boost the response.

The federal government anticipates that 40 million doses of vaccine could be available in the US by the end of December if both the Pfizer/BioNTech and Moderna vaccines are approved.

Vaccine advisers to the US Centers for Disease Control and Prevention on Saturday voted to recommend Pfizer’s coronavirus vaccine for people 16 and older. The vaccine this week received emergency use authorization from the US Food and Drug Administration.

Next phase could include teachers

Again, depending on whether more vaccines have been approved, the second phase could begin by April.

Phase 2 might include kindergarten-12th grade teachers and staff and other child care workers, as well as other critical workers such as retail workers and transportation workers. This group could also include people in homeless shelters and all people over 65 who were not already included in the first phase.

Phase 1 and 2 combined would cover about 45% to 50% of the US population, according to an independent committee to help policymakers fairly allocate and distribute a coronavirus vaccine.

CDC Director Dr. Robert Redfield told the Senate in August he did not think the general public would be able to get vaccinated until the “late second quarter, third quarter 2021.” April is the beginning of the second quarter of the year.

What about the rest of the population?

The rest of the population is going to have to wait for months before rolling up their sleeves for a vaccine.

Phase 3 would include young adults, children and workers in industries essential to the functioning of society and at increased risk of exposure who were not included in the first two phases. Phase 4 would include everyone else.

So healthy adults under the age of 65 and children may well have to wait until the spring or even the summer, depending on how many vaccines get approved, how quickly they can be manufactured and distributed, and how the debate goes over allocation.

Dr. Anthony Fauci, the director of the National Institute of Allergy and Infectious Diseases, told CNN that groups receiving the vaccine over the next four months will likely include those in “high priority groups.”

“I would project by the time you get to April, it will be … ‘open season,’ in the sense of anyone, even the non-high priority groups could get vaccinated,” Fauci said.

Pharmacy chains and big-box stores are also gearing up to deliver vaccines — including places where people normally get flu shots, grocery store pharmacies and physician offices.