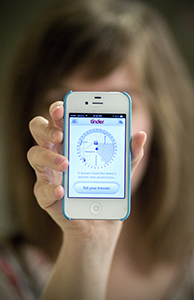 For Megan, it was the second date that truly blew her away. Dinner, ice cream, fireworks and a first kiss made it a night Megan, who asked for her last name to be withheld, won’t soon forget.

“It was literally so perfect.”

Although all of these events happened in person, that’s not how they met. Their two-month relationship is the product of Tinder, an online dating app that makes matches when traditional face-to-face dates have either failed or not lived up to expectations.

But a new study released last month by the Pew Internet and American Life Project, “Online Dating and Relationships,” revealed that online dating is becoming much more common. Approximately 10 percent of Americans between the ages 18 and 24, the college-age population, have used an online dating website or mobile app.

Additionally, 38 percent of adults who identify as single have tried online dating.

Aaron Smith, the lead researcher for the study, said the changing stigma associated with online dating is behind the changing numbers.

One reason Smith said people are becoming more accepting of online dating is how much people are exposed to it.

“People are much more likely now to know someone who uses online dating,” he said. “They’ve seen people that they know and care about using it themselves, and, as that’s happened, their attitudes have changed accordingly.”

Although smartphones have been around for approximately five years, smartphone dating apps are relatively new.

“Smartphone dating apps are a relatively new phenomenon, and at the moment just 3 percent of the population uses them,” Smith said. “They have taken a stronger hold among younger adults. Five percent of people ages 18 to 24 have used a dating app.”

– Plenty of Fish is an online dating website that claims to have 50,000 new singles every day. Signing up is completely free. After taking a chemistry test, Plenty of Fish works to match up users who will meet each other’s emotional needs that will lead to a long stable relationship.

– It offers free and subscription memberships. As a free member, users are able to create a profile, upload pictures, send and receive winks, conduct searches and use Match.com’s unique matching system. Members with a paid subscription are able to send and receive messages, see who’s viewed their profile, instant message, keep track or connections and attend Stir events. Match.com has a main site, a mobile site and a smartphone app.

– The app won’t say how many users it has, but AppData estimates it has approximately half a million active monthly users.

– Tinder is a smartphone dating app that allows users to find people interested in them nearby. The app is free and is meant to emulate the way people interact in real life.

– Grindr is a free, all-male mobile dating app. The app is location-based and offers men the ability to find a date or make a new friend.

– OkCupid claims to be the best and fastest growing dating site on Earth and uses math to make matches. It is free to make an account, but users can pay to get additional features.

Although college-aged people are less likely to use online dating websites, mobile dating apps have taken a stronger hold among younger adults. Of the 3 percent of the population that uses dating apps, people ages 18 to 24 account for 5 percent of users.

Among that 5 percent is Meredith, who asked for her last name to be withheld, a junior interior design major at Kent State. She created a profile on Tinder, a free dating app, and has found it to be a successful way to meet new people.

“I have met one male from Tinder, and we are talking pretty seriously right now,” she said.

One characteristic of Tinder that Meredith said she enjoyed was the flexibility of the app.

“You don’t necessarily have to use it as a dating site,” she said. “Some people, in their profiles, will say if they are looking for something serious or just to make friends.”

Although Meredith has found success with online dating, some are not as pleased with the new form of dating.

Freshman psychology major Austin Hazelett used to have a profile on Plenty of Fish, a free online dating website, but wasn’t satisfied with the results.

“I’ve honestly had better luck with Facebook,” he said. “Some of the people that go on these websites are just weird. I can’t see myself ever having a successful relationship using those sites.”

Smith said there are two major complaints from people who use online dating.

“Meeting someone in person and feeling like they misrepresented themselves in their profile” is a problem, he said. “And (so is) uncomfortable or harassing contact on dating sites.”

Despite some of the negative feedback about online dating, Meredith is convinced otherwise.

“After I used it and met up with someone who I really like and who I share very similar views with in a lot of aspects of life, I am now a full supporter of it,” she said.