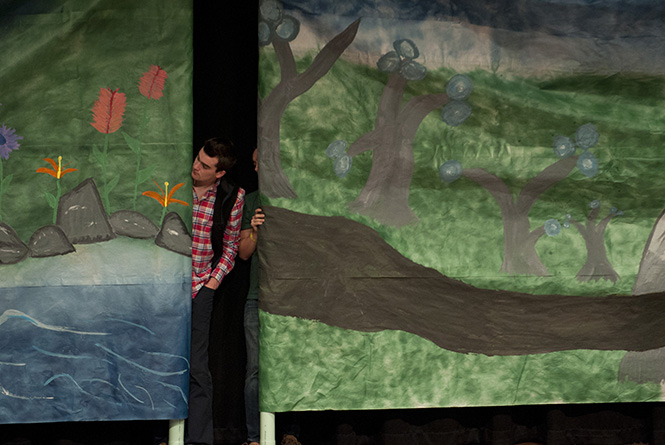 Greek community members hold up the back drops for a team's performance at Songfest on Saturday Nov. 9, 2013 in the ballroom. Songfest fundraised money for the Rape, Abuse and Incest National Network (RAINN). More than $49,000 was raised for the organization by Kent State's Greek Community. Photo by Brianna Neal.

The Greek community banded together at Songfest Saturday to benefit the Rape, Abuse and Incest National Network and raised $49,027 for the cause, beating the established goal of $30,000.

At Songfest, paired teams of fraternities and sororities performed skits and musical numbers to explain the function of RAINN in the Kent State Ballroom.

The groups learned of their teams after Homecoming and had only three weeks to prepare for the competition.

Chris Moyer, senior architecture major and vice president of philanthropy and community service for the Interfraternity Council, said, “When we finally totaled everything up, it was just a moment of complete disbelief of how much we raised this year. It blows everything out of the water and it’s become the largest philanthropy we’ve ever had as a Greek community.”

This year’s overall winners were Sigma Sigma Sigma, Phi Kappa Tau, Tau Kappa Epsilon and Phi Iota Alpha. The team performed a skit about sexual assault with medieval attire and the knights of the RAINN round table and also grabbed first place for fundraising.

Marci Matthews, a RAINN representative, addressed the crowd after all the performances finished.

“I would like you guys to know that the world is a better place because of you; I promise you now it is,” Matthews said.

Chelsea Bowers, developmental director for RAINN, was one of the judges for Songfest and seemed pleased with the results.

“I was just impressed with just how much there was to be involved in each of these. They must have worked so unbelievably hard to pull all of that off,” Bowers said. “Some of these groups are really interested in changing the culture on campus, and in the past year, I’ve actually seen a lot of difference in the Greek life in general. They’re really stepping up as a leader in fighting sexual violence.”