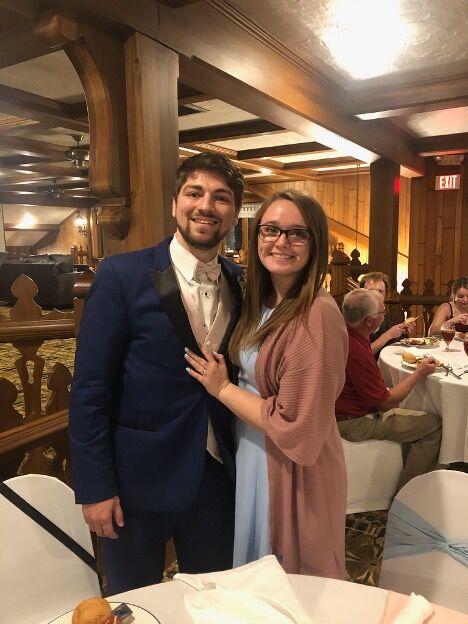 Miranda Harper, senior psychology major at Kent State, and her fiancé Josh Davis celebrate at a friend’s wedding a few weeks after they were engaged on July 3, 2020.

One hundred years ago, getting married at 20 years old was typical, but in 2020 it is a rarity. Most couples decide to legally commit to a lifelong relationship when they are 28 to 30 years old, if ever, according to the Census Bureau.

Chief university psychologist Pamela Farer-Singleton has counseled with fewer than one married couple per year in all of the 26 years she has worked for Counseling and Psychological Services. However, just a few decades ago the statistics were quite the opposite.

In 1958, an archived Kent Stater article reported that one out of every five men were married at Kent State alone. But as of 2018, only 7% of undergraduate students, including both men and women, were married nationwide, according to Campus Explorer.

Miranda Harper, a senior psychology major at Kent State, speculates that couples may wait longer to get married because of school or because they are waiting on the perfect soulmate.

“In college you’re surrounded by a lot of people that don’t want to settle down or who want to get their degree first and then get married. They have a setup in mind of when things should be done,” Harper said. “Or maybe they just haven’t found the right person yet, which is OK; there isn’t any technical timeline.”

Harper, 22, is one of the few who has decided with her fiancé, Josh Davis, 24, to get married while still in college full time. Their wedding is set for November 2021, right after Harper graduates with her bachelor’s degree in May and before she begins her master’s degree at Kent State in the fall.

“I’ve always had my mind set that I wanted to get married by the time I’m 23, and I’ll be getting married a month and day before I’m 23, so I’m excited,” Harper said. “I didn’t think that I would end up getting married so soon.”

Harper and Davis met over a Tinder date in 2018 and officially started dating the end of July of the same year. They moved in together a few months later and started a family of two rescued kitties and one sweet dog, Harper said.

“I don’t think our lives will change that much (after getting married). We split everything evenly. He cooks; I clean because I can’t cook,” Harper said with a laugh. “We have a joint bank account so that it’s easier to pay bills. I feel like nothing is going to change except that we have the same last name and maybe more dogs.”

Farer-Singleton advises couples to take big life changes, whether it be marriage or moving, slowly and give time for adjustment.

“I have seen couples that are living together, even for an extended amount of time, decide to formalize their relationship and assume there will be no difference between living together and being married,” Farer-Singleton said. “But I would caution them to know that when you become married there are things that will change because everything your partner does affects you legally. You are legally committed and responsible as a team versus an individual.”

Harper is not worried about the legalities of marriage but looks forward to a lifelong committed relationship with Davis.

“At the beginning we decided to go into the relationship mature. We were both upfront about our feelings and what we wanted out of the relationship, and I was looking for something long term,” Harper said. “Josh and I talked about getting married and kind of just knew that was a good choice for us.”

Although it is more common for students in more recent decades to stay single through their college years, Farer-Singleton believes that does not mean marriage is an unwise choice for students who can balance academic demands and family responsibilities.

“Some students are mature and are ready to take that step,” Farer-Singleton said. “Students should be aware of the challenges and the seriousness of the commitment but be excited about sharing the same values and goals throughout a lifetime as each other’s biggest supporters.”