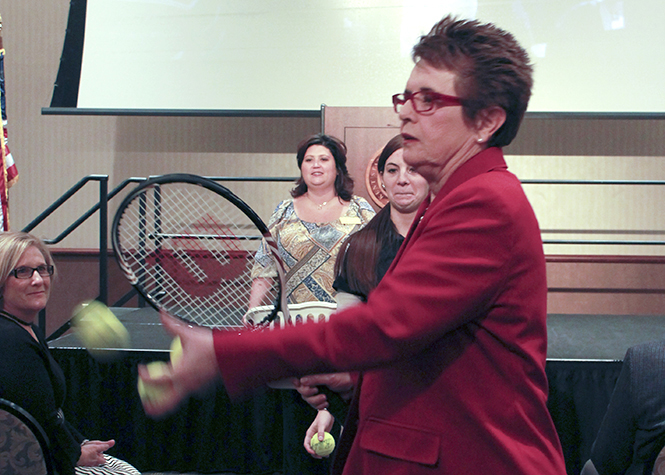 Billie Jean hits hits autographed tennis balls to the audience after her speech on Tuesday Nov. 12, 2013 at the Kent State Stark Campus. Photo by Kristi Garabrandt.

Billie Jean King, tennis champion, women’s rights activist and 2009 recipient of the Presidential Medal of Freedom, spoke to an audience of about 600 students, faculty and members of the general public in the Timken Great Hall at the University Center as part of Kent State at Stark Featured Speakers series Tuesday night.

King, who was named one of the 100 Most Important Americans of the 20th Century by Life Magazine as, told the audience “everyone is an influencer” and spoke on having both inner and outer success. King also told the audience that “relationships are everything and to never stop learning or learning how to learn, to be a problem solver and to keep reinventing yourself.”

King then acknowledged the presence of Renee Powell, the second African-American woman to play with the Ladies Professional Golf Association and thanked her for her contributions to women in sports.

King ended the event by picking up her tennis racket and walking through the audience swatting approximately 100 signed tennis balls to audience members.