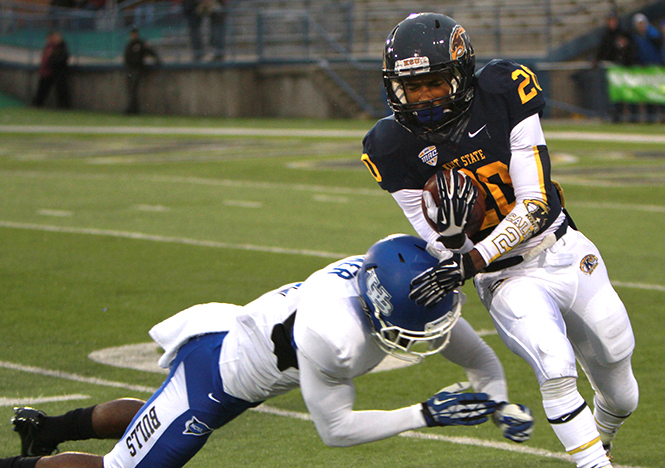 Freshman wide receiver Ernest Calhoun holds off a player from the Buffalo Bulls on Oct. 26, 2013 in Dix Stadium. The Golden Flashes lost the game 41-21. Photo by Chloe Hackathorn.

For Paul Haynes, this week is different.

The Flashes’ first-year coach has taken a different approach to their 10th game of the season, and for good reason.

“It makes or breaks seasons,” Haynes said. “You throw records out the window, you throw what has happened in the past out the window — it does not matter. It just comes down to what happens at 3:30 on Saturday.”

Kent State and Akron have struggled through the 2013 season to identical 2-7 (1-4 Mid-American Conference) records. Postseason eligibility is no longer a possibility, and with three games left in the season, the two teams essentially have only pride to play for — and the Wagon Wheel.

According to legend, the trophy was allegedly part of a carriage belonging to John R. Buchtel, the original namesake of Buchtel College, now known as the University of Akron. The legend claims that Buchtel’s carriage became stuck in the mud near Kent State’s current location, and the wheel was dislodged when horses pulled the carriage out. The wheel was eventually discovered during construction near the present-day campus, the legend says, and the two teams started playing for it in 1946.

During their difficult 2013 campaigns, both Kent State and Akron may have resembled wagons stuck in mud, but they’ll be sure to be out of the muck come Saturday.

“We’re playing for each other, our teammates, our coaches, our university, our families,” said tight end Casey Pierce, who posted career-highs of five catches for 71 yards in a 41-21 loss to Buffalo on Saturday. “We’re going to give our total effort, 100 percent, and it being Akron week, it heightens that. The goal is to not send the seniors out with a bad taste in their mouths and win for the university, our teammates and each other in the locker room.”

The trophy currently resides front and center in the Kent State locker room, “right where it should be,” defensive end Nate Vance said. And while the wheel is very important to the Flashes, they’re also taking the field defending a three-game winning streak against Akron.

“We haven’t lost since I’ve been here and we don’t plan on it,” Pierce said. “The energy is there, Coach Haynes brings it because he’s been a part of it. Akron is Akron.”

Haynes, who played against Akron as a player in the late 1980s and blew his knee out against Akron at the Rubber Bowl in 1989, subtly curled his lips in disgust when considering the thought of a loss to the Zips during Monday’s press conference.

“Like I told them, whatever it takes, however we have to do it, whatever we’ve got to do, it’s got to get done,” Haynes said. “One of the hardest things to do when you talk about that wheel, is to have them run over and take it. That’s what you can’t have happen. You cannot. By any means necessary.”

The Zips snapped a 28-game losing streak against Football Bowl Subdivision opponents Oct. 19 when they defeated Miami (Oh.) 24-17 in Oxford. The next week, Akron returned home and played competitively before ultimately falling to Ball State 42-24.

But as Haynes said, records do not matter when it comes to the Kent State/Akron rivalry. That and much more will be preached again and again this week as the Flashes look to earn their fourth straight victory against the Zips and keep the Wagon Wheel for another year.