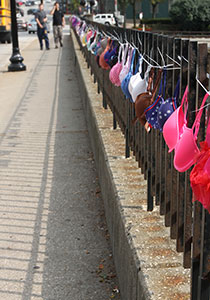 Artist Amy Mothersbaugh of the Celtic Club displays bras from the Main Street bridge near the Pufferbelly for the fourth year to raise breast cancer awareness, October 3. Photo by Chelsae Ketchum.

People commuting across the Cuyahoga River Bridge in Kent on Thursday noticed something a little different. From polka dots to zebra stripes, nearly 200 donated bras lined the railing of the bridge, along with one, 20-foot-long pink bra that draped over the underpass.

Thursday’s display was part of an annual event, the Celtic Club Fights Breast Cancer, started by the Celtic Club in Kent four years ago — an event to raise awareness for breast

“What we’re trying to do is just convey a message of hope, that a cancer diagnosis is not necessarily a death sentence,” Celtic Club president Jim Collver said.

Fall showers may have dampened his event, but the display still sparked reactions.

“What are all the bras for?” a driver questioned.

As people walked across the bridge, they closely observed the 200-foot, decorated railing.

“Nice impact,” a woman commented in awe as she pedaled by.

Collver created the displays in memory of his grandmother and aunt, who both died from breast cancer, and his girlfriend, who died from lung cancer.

“When you watch somebody go through something like that, it just changes the way you look at pretty much everything — and I wanted try to make it easier for someone facing that,” Collver said.

His sister, Charlotte Barton, 59, also stands by his message.

“You can never be too aware of what’s going on because everybody knows somebody,” Barton said. “I think the only message that anybody can say is share and care.”

Along with the displays, the organization coordinated more than 40 bra donation sites in six Northeast Ohio counties, according to an email from Collver.

The donations will go to battered women’s shelters after the displays are done, Collver said.

“We’re looking forward to continuing to do this for as long as we can,” Collver said.

“But it’s going to have to stop raining in Kent,” he said.