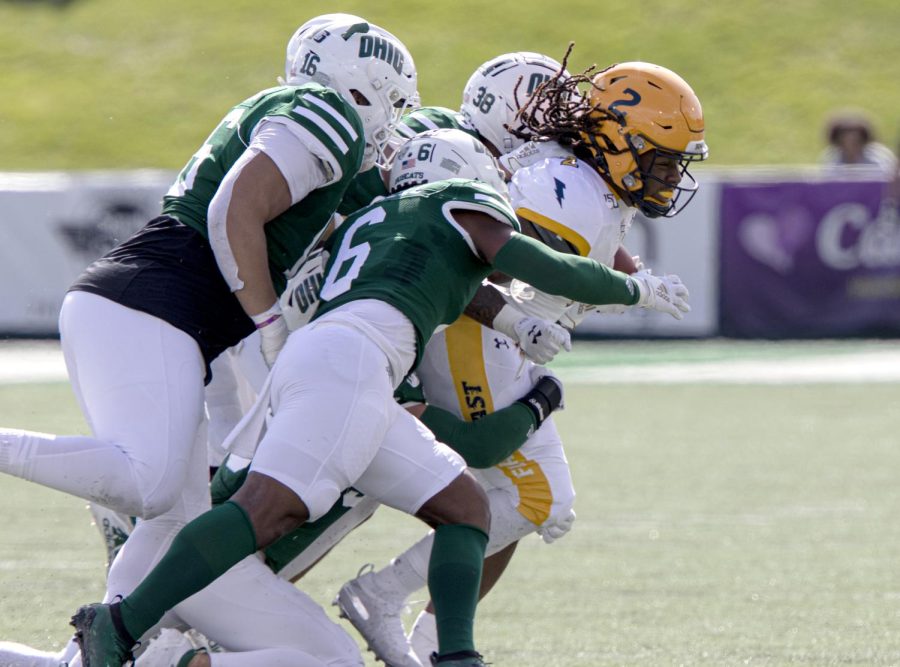 Senior running back Will Matthews is tackled during Kent State's game at Ohio University on Saturday, Oct. 19, 2019.

For the first time this season, Kent State’s football team has seen a game cancelled due to concerns about COVID-19.

The Flashes were slated to face Miami University this Saturday at noon in Oxford, Ohio, but the game has been declared a no-contest.

The no-contest ruling means that the game will not impact either team’s record, leaving Kent State at 3-1 and Miami at 2-1.

The announcement from Kent State said simply that the game had been cancelled due to “COVID-19 concerns” but a statement from the Mid-American Conference specified that the cancellation stemmed from testing on KSU’s roster.

“The Kent State University at Miami University football game on Saturday, Dec. 5th has been cancelled due to roster issues with the Kent State football team related to positive COVID-19 and subsequent contact tracing. The game has been declared a no contest,” read the MAC statement.

Further testing is ongoing for Kent State and it is unclear if the team is still actively practicing, but the Flashes will be preparing for their final game against Ohio University on Dec. 12 at Dix Stadium.

This is the second time that a MAC contest has been cancelled due to COVID-19, the first time being a game between Ohio and Miami and was due to positive tests on Ohio’s roster.

In that case, both teams were able to play the next week.

This cancellation narrows the Flashes’ path to the MAC championship game and virtually erases the ability of Miami to make the game. The University at Buffalo is currently 4-0, meaning that the best Kent State can do is tie the Bulls’ win total by beating Ohio to end the season.