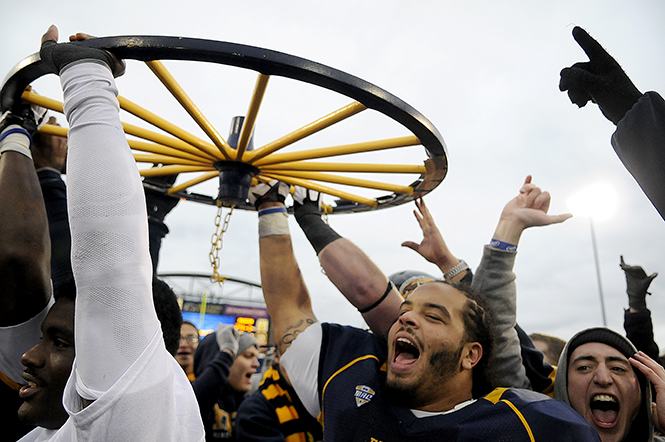 For much of the offseason when talking about Kent State, the focus fell on offensive playmaker Dri Archer.

During the early portion of the regular season, the focus remained on Archer despite being injured. His absence hurt the offense in obvious ways, and the unit immediately improved when he returned.

Archer’s presence helped the offense in two ways. His physical talents — speed, quickness, elusiveness — made him an immediate weapon for the Flashes’ offense. But his mere existence on the field also drew added attention to him from the Western Michigan defense, and thus, away from other Kent State players.

Senior wide receiver Tyshon Goode experienced this firsthand last weekend when he enjoyed a little less attention in the win against WMU.

“Whenever [Archer] is on the field, they automatically point him out and know where he’s at,” Goode said. “I think they make certain adjustments to where it leaves us guys on the outside, it opens it up for us a little bit.”

Goode enjoyed a solid game in Kalamazoo, Mich., catching five passes for 57 yards and coming tantalizingly close to a touchdown in the second half. After reviewing the film, he thinks he crossed the goal line for a score, but he still thinks he has plenty to work for in the coming weeks.

“I still feel like I haven’t put together a perfect game quite how I’ve wanted to,” Goode said. “I’m still striving for excellence every time I go out on the field. I’m looking to get better.”

Goode wasn’t the only player who benefitted from Archer’s return to the field. Running back Trayion Durham had his best game of the season against Western Michigan, carrying the ball 26 times for 154 yards and two touchdowns. Flashes head coach Paul Haynes knows the advantage Archer presents to the offense.

“He’s a good player,” Haynes said. “When he’s out there on the field, it creates mismatch problems for a lot of defenses, and it opens it up for us to do some other things on the offense.”

As for Archer’s performance, his statistics indicated a game that many have come to expect from the multi-talented athlete. He ran the ball six times for 73 yards and also caught four passes for 48 yards and scored a touchdown, his first of the season. For Archer, it was a welcome feeling to be back out on the field.

“It felt pretty good,” Archer said. “Knowing after that first catch I was going to be able to finish the game healthy, I just kept going and kept fighting. I stopped thinking about my ankle and just started playing football.”

Archer is well aware of his role and high value to the offense, which put up 32 points in Saturday’s win.

“It helped a lot,” Archer said. “When you have someone who can make plays, just open up the offense for other players around, like Trayion and a couple receivers, when you have that big playmaking ability from somebody on offense, it helps a lot.”

Northern Illinois (4-0) is very familiar with Archer and his importance to Kent State’s (2-3, 1-1 Mid-American Conference) success. But with the addition of Archer, the Flashes’ offense finally will have the multiple threats and depth available to attempt to keep up with the Huskies’ high-powered offensive attack.

Haynes, a 1993 graduate of Kent State and former standout safety during his playing days, will enjoy his first Homecoming weekend Saturday. Haynes came up with the idea of Saturday’s “Gold Out” theme at the game, and even recorded a short video clip in the university’s official Homecoming T-shirt encouraging fans to wear gold in support of the Flashes.

“I just wanted to do something to get the fans involved and a part of it with the atmosphere,” Haynes said. “They’re coming, and now we’ve got to take it a step further and do something else, and we’re going to have a bunch of pom-poms and slap-sticks to get them involved in the game, just to make them feel involved too. It should be a great environment.”

When it comes to thinking about the weekend as his first Homecoming experience, he said he hasn’t spent much time pondering it, but will participate in some off-field events prior to the game.

“It’ll be good to get the captains back for our captains’ breakfast,” Haynes said. “[A] lot of the people I went to school with are coming back, and it’ll be the first time I’ve seen them in I-don’t-want-to-say-how-many years, but years. It’ll be fun, like I said, a great atmosphere, great game and great weekend.”