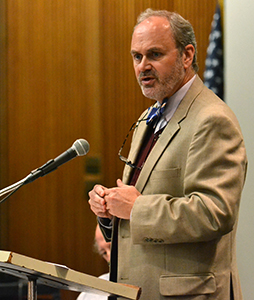 Kent State Faculty Senate announced course evaluations would be given electronically beginning in Fall 2014 for all traditional face-to-face classes.

The Student Survey of Instruction evaluations are given to students at the end of courses, and the evaluations give the faculty feedback from a student’s perspective, provost fellow Jarrod Tudor said at Monday’s meeting.

Tudor said the questions would be the same as the current paper SSIs, but the change is to help reduce Kent State’s carbon footprint and to save time.

“We’re going to run a small pilot this semester,” Tudor said. “It’s going to include all of the FYE sections here at the Kent campus.”

He said a larger pilot will run in the spring semester, and it will include all FYE sections and other courses at the Kent campus.

The new evaluations will have a 15-minute time limit as well as a character limit, Tudor said.

For students who do not have a smart phone or laptop immediately accessible, Mary Lou Ferranto, assistant professor of nursing at the Salem branch, suggested professors check out computers from the library for students.

Tudor assured the Faculty Senate that the surveys would be exactly the same, the only difference being the digital format.

In addition to the new SSI format, Faculty Senate also discussed the need for faculty input regarding the selection of Kent State’s new president and the issue of secrecy that surrounded the last presidential search.

George Garrison, at-large executive committee member and Pan-African Studies professor, said the faculty should have a say “in what arguably is one of the most important decisions that will be made at this university.”

“I just don’t see the need for privacy for the candidate overruling the important need for faculty input in this important process,” Garrison said.

The Faculty Senate’s next meeting will take place Nov. 4 at 3:20 p.m. in the Governance Chambers of the Student Center.

Katie Smith is the academics reporter for the Daily Kent Stater. [email protected]