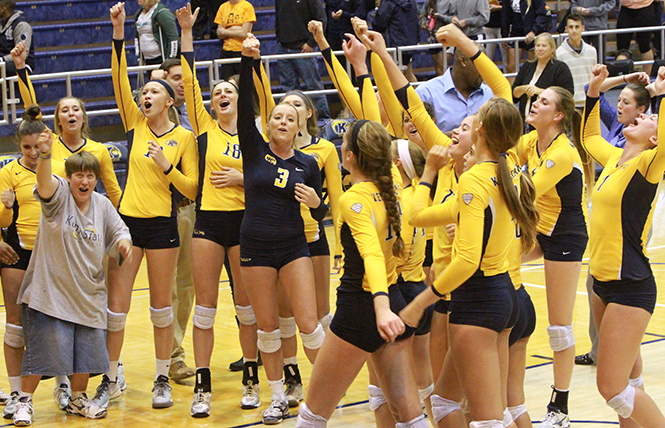 The Kent State volleyball team faced its toughest opponent of the season so far Thursday, going into its game against No. 18 Ohio as underdogs. The team showed its opponents and its fans that it was up for the challenge, making history in the process.

The Flashes started their meet off strong and upset the nationally ranked Bobcats in four sets (25-23, 21-25, 25-18, 25-22) Thursday night at the M.A.C. Center. Kent State (9-9, 3-2 Mid-American Conference) earned its third conference win of the season while handing the Bobcats their first MAC loss and third loss overall.

After the game, head coach Don Gromala couldn’t say enough about his players and their performance against the Bobcats.

“When we were down, we played just as hard as when we were ahead,” Gromala said. “That’s how we came out on top in this match.”

The Flashes began the first set on a 5-0 scoring run before Ohio battled back and made the set close. Kent State held on to its lead, and sophomore Kelly Hutchison earned a kill to win the set for her team.

The Bobcats won the second set, but the Flashes regained control in the third set with a decisive seven-point victory. Kent State trailed for a majority of the fourth set but stormed back with an 8-0 run capped by a game-winning kill by freshman Bianca Cifaldi.

Hutchison scored a career-high 22 kills and added nine digs to lead the Flashes.

“We needed her to be great tonight, and she was.” Gromala said of Hutchison’s performance. “So I think that shows that she’s really ready to step it up. Hopefully we can rely on her for the rest of the season.”

The Flashes will now prepare to travel to Mount Pleasant, Mich., for another conference matchup against the Central Michigan Chippewas at 7 p.m. Saturday.