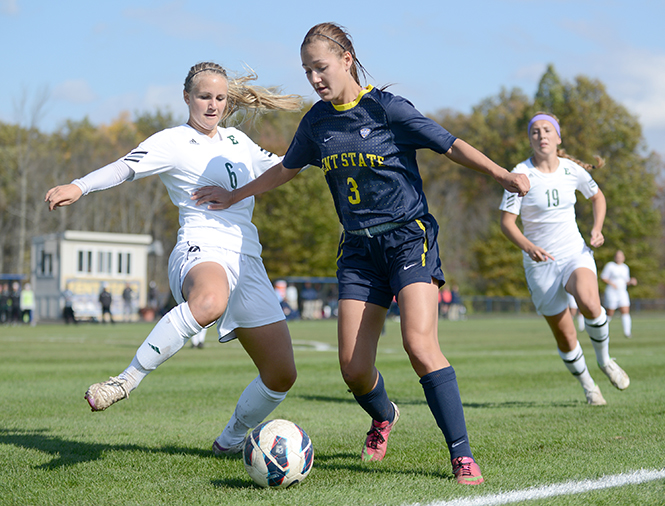 Junior forward Stephanie Haugh (center) prepares to take a shot at the goal, to no avail, as Kent State fell to Eastern Michigan University on Sunday, Oct. 20, 2013, a final score of 2-0. Photo by Jenna Watson.

The Kent State soccer team (10-6-0, 5-3-0 Mid-American Conference) begins their final road trip of the season this weekend as they travel to Northern Illinois Friday and Toledo Sunday.

The Flashes, which are entering the home stretch of their season schedule with one final road run, are coming off a split weekend home stand. After defeating MAC juggernaut Western Michigan 3-2 Friday in dramatic fashion, Kent State fell to Eastern Michigan 2-0 in a disappointing effort.

Kent State head coach Rob Marinaro rounded up his players after the game and gave his team a strict warning about giving its opponents time and space during games. After his fiery speech given to ignite the Flashes and keep their chins up, Marinaro used team practices this week to hone in on pressuring the ball more against fellow MAC teams Northern Illinois (4-9-3, 2-4-2 MAC) and Toledo (5-10-1, 2-5-1 MAC).

“I think we learned our lesson,” Marinaro said about the Eastern Michigan game last Sunday. “I don’t think we’re going to give opponents the time and space that we did last weekend.

“We have two very good opponents this weekend, so we look to improve our side of the ball and look for the best outcome.”

Throughout the season, the Flashes reputation of being a second-half team has preceded them. Junior Cali Rinicelli said the team has to preserve the high-octane pace of close games.

Marinaro said tightening up on defense and putting more pressure on the ball will help his team get that first-half boost they seek.

Marinaro said there has been a lot of energy and a lot of players helping each other this week in practice, and said his team needs to carry that momentum into game situations, something Kent State failed to do last week against Eastern Michigan. Communication was lacking among Kent State’s offensive unit.

“We just need to communicate better,” freshman defender Mariah Sidwell said. “We need to be more confident as a team.”

One thing that has really helped the Flashes during tight game situations is the ability of some of the bench players to be thrown into the fray of the game and produce.

Senior Megan Johnson, who has been a marquee bench player for the Flashes in the second half of the season, said she always tries to pick up the intensity and make her presence known every time she sees action on the field.

“We’re going to come out strong and play the way we should play,” Johnson said.

Sidwell said it means a lot to her to be able to jump into crucial MAC games as a freshman.

“There’s only five defenders, so when one of us gets a chance to come in, it feels good (because) we’re kind of like family back there and we always have each other’s backs,” Sidwell said.

The Flashes will go head-to-head with the Northern Illinois Huskies Friday at 7 p.m. and face the Toledo Rockets Sunday at 1 p.m.