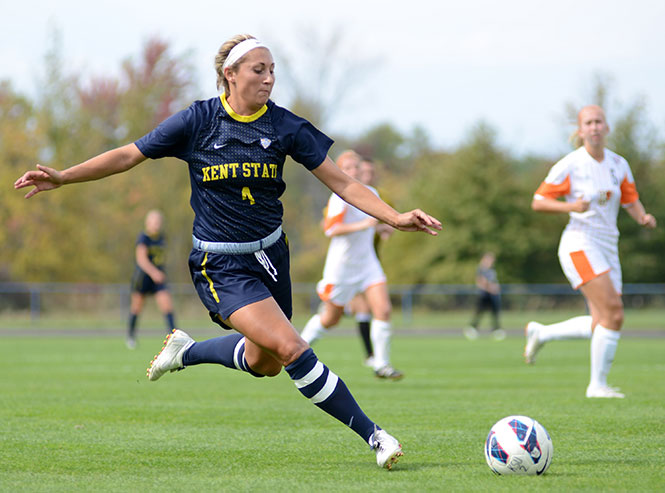 After tasting defeat in its first Mid-American Conference game at the hands of Central Michigan last Friday, the Kent State women’s soccer team (6-4-0) knew it had turned its postgame frustrations into something constructive.

Still fuming about their defeat and looking to make a statement, the Flashes decided to use their tough 1-0 loss as motivation going into their game against another MAC rival, Bowling Green.

In that game, Kent State came roaring back and routed Bowling Green 5-1 in a fast-paced, high-scoring game that left Kent State fans in attendance cheering in excitement.

The Flashes, who have had problems scoring early in games so far this season, racked up five points last Sunday, making it the first time this season the Flashes have scored more than three goals in a single game.

“We need everybody to be on their game and moments where you can put a ball in the goal to be able to finish that, and that was the big difference (Sunday),” Kent State head coach Rob Marinaro said of his team’s performance last weekend.

Senior Jessacca Gironda, who is now leading the team in goals and points with six and 15 respectively, said it felt good for the team to really get the ball rolling last weekend in its first two clashes with MAC competition. Her hat trick in Sunday’s game proved instrumental in lifting the Flashes’ team morale and leading them past Bowling Green.

“It was an awesome thing, but I wouldn’t have been able to do it without my teammates,” Gironda said of her hat trick. “[My teammates] came through really big and put me in good position to score some easy goals.”

Goals may not be as easy to come by against the Ball State Cardinals and Miami Redhawks this Friday and Sunday. Unlike Bowling Green, who has yet to win a game this season, Ball State is 7-2-1 with six shutouts, and Miami is 4-6, with all four of its wins coming as shutouts. Both teams look to be formidable opponents this weekend as well as true tests for the Flashes in the MAC.

“These are two programs we have a lot of history with,” Marinaro said. “It’s a typical MAC game of who’s gonna come out and fight the hardest for 90 minutes on both games. Both teams are high quality, so we’re gonna have to play some good soccer.”

Marinaro said he expects the Flashes to use the momentum they gained from last Sunday’s victory to rise to the tough challenges the Cardinals and Redhawks present this weekend.

“Hopefully the team has a little bit of confidence going into this weekend,” Marinaro said. “We’re looking for two fantastic efforts this weekend against Ball State and Miami.”

Gironda said scoring goals, especially early in games, will be essential in beating good defensive teams like the Cardinals and Redhawks.

“I think in games where we’ve gotten goals early, it just sets the tone for it all and puts the pressure on (the opponents), so if we can get one in it’ll definitely shift momentum and keep them on their heels,” Gironda said.

Friday’s action against Ball State starts at 4:30 p.m. and Sunday’s contest against Miami begins at 1 p.m.