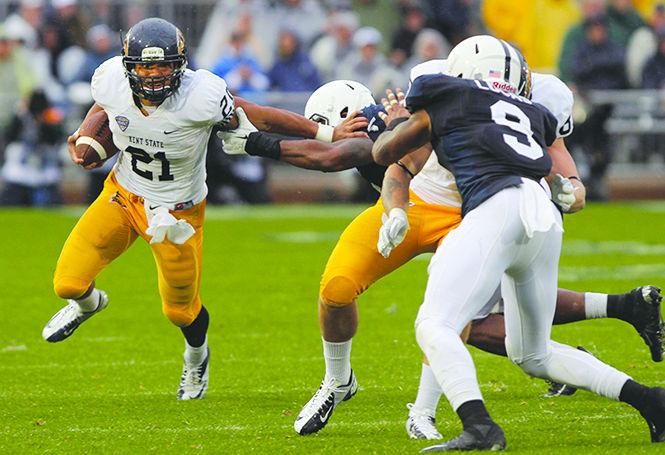 Kent State running back Anthony Meray (left) looks downfield as he pushes away a Penn State defender during the game on Saturday, Sept. 21, 2013. Kent State lost the game at Beaver Stadium, 34-0. Photo by Melanie Nesteruk.

One look at the faces of coach Paul Haynes and seniors Luke Wollet and Pat McShane says it all.

After eight straight games, the Flashes are weary.

A grueling, 12-game schedule void of a bye week has done the Flashes no favors, and it doesn’t get any easier this week when they host Mid-American Conference opponent Buffalo.

“It’s been tough,” Haynes said. “Five out of six weeks, and I think the one thing you’ve got to look at is, these guys still got to go to school. … We’re not going to use that as excuses, but it has been tough. When you do look at their faces, when you go to bed check and guys are asleep, it tells you the tale.”

In the midst of a relentless season that has left many key Flashes banged up, Haynes started to scale back the physical effect of weekly practices nearly a month ago. But now, with Kent State mired in another three-game losing streak, the challenge falls more on the side of mental toughness.

“We’ve cut practice, we do very few reps compared to some other places I’ve been,” Haynes said. “A lot of it is mental for us. We’ve got to take a lot of mental reps. That’s where we harp on preparation and coming in, watching film. We don’t have the bodies to bang and pound normally, like you may do. We modify a lot.”

Although the players may be tired and in need of a week off, just four games remain in the college football careers of seniors such as McShane and Wollet.

The injuries Wollet mentioned included starting quarterback Colin Reardon, who missed the game against South Alabama due to an ankle injury, punter/kicker Anthony Melchiori, who the Flashes have missed dearly on special teams since his hamstring injury, and standout defensive lineman Roosevelt Nix.

Senior quarterback David Fisher started in place of Reardon on Saturday and played admirably well, completing 14 of 26 passes for 181 yards and rushing for 106 yards on 12 carries. Haynes was pleased with his play despite the loss.

“The thing that I thought Fisher did a good job of doing is getting first downs with his feet,” Haynes said. “When it wasn’t there, (Fisher) didn’t try to force it. He tucked it and he ran, and that’s what we basically wanted him to do. Not try to force it in there and make some turnovers.”

Place kicker Brad Miller’s play wasn’t as exciting for the Flashes. Miller’s first field-goal attempt — a 41-yard try on the Flashes’ opening drive — was blocked, and a 31-yard attempt midway through the third quarter also failed. Unfortunately, bad news only got worse Monday — Haynes said it is likely that Melchiori’s season is over.

On the bright side, Reardon might be able to play Saturday against Buffalo.

“Colin still is our starting quarterback if he’s healthy enough to be it, and we’ll go from there,” Haynes said. “He felt better every day last week. … I look for him to be back in there, but it’s still dependent upon how he feels.”

Nix’s status also is uncertain and considered day-to-day, but his injury, which Haynes described as a herniated disc in his back, is more volatile and will be treated with extra caution.

Buffalo, meanwhile, appears to be riding high after recording its fifth-straight win, 32-3 against UMass on Saturday. But one look at the Bulls’ schedule makes them one of the more perplexing teams when judging just how good they are.

Buffalo started the season 0-2, with double-digit losses to No. 4 Ohio State and No. 8 Baylor. But the Bulls responded in Week 3 with a five-overtime victory against FCS member Stony Brook and then reeled off wins against Connecticut, Eastern Michigan, Western Michigan and UMass.

A 5-2 overall record heading into Week 8 is something most teams would like to claim, but Buffalo’s strength of schedule leaves plenty to be desired. The Bulls’ five victories have come against teams with a combined record of 5-29.

Still, the Flashes will have to bring everything they have in order to top the Bulls. For McShane and Wollet, there’s no questioning their effort heading into the final four weeks of the season.