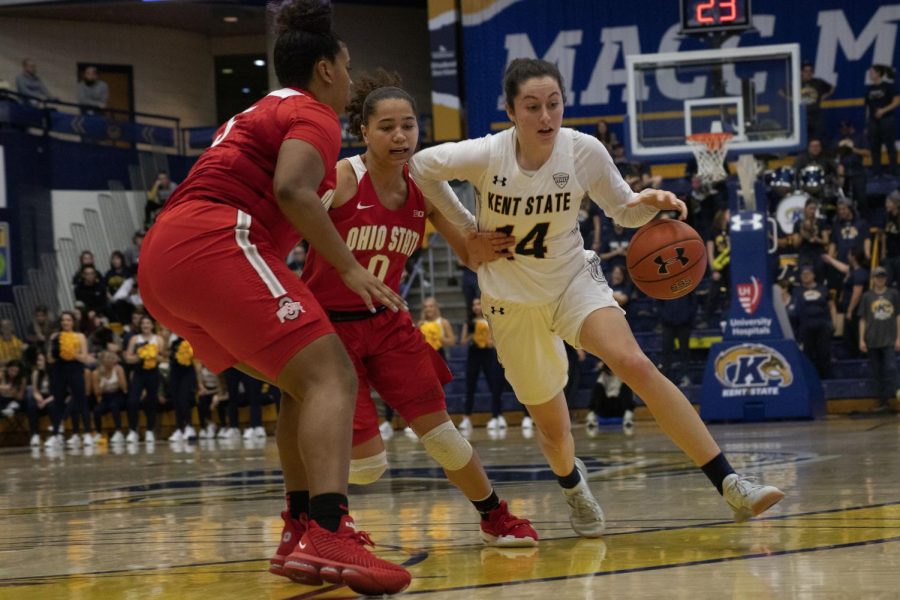 The Kent State Flashes playing the Bucks in 2019.

Kent just came out of a 10-day pause due to coronavirus issues within the team, meaning they only had three practices before the game.

“The biggest takeaway is that we weren’t ready for this game with just coming out of quarantine,” coach Todd Starkey said. “The kids want to play and that was the only game available to take and at the end of the day, they’re better than us. But, the second thing given the circumstances, we were just in over our heads based on all the factors involved.”

The Flashes struggled offensively and were outscored 31-4 in the first quarter.

Kent’s first point came with 1:18 to go in the first quarter when freshman guard Casey Santoro split a pair of free throws.

The Flashes’ first field goal came when sophomore forward Nila Blackford made a layup with 10 seconds remaining in the first quarter.

“I thought we had some things happen well for us when we actually executed, but I think it’s one of those games where you almost throw away the tape and start over,” Starkey said.

“I thought in the second half we played with a lot more fight and we were a lot more poised,” Starkey said. “The third quarter was 22-16 and we scored more each quarter as we went. We got some decent looks early, we just didn’t make any.”

The Flashes’ defense allowed a 26-0 Buckeye run to start the game and the Buckeyes shot 59% on 39 of 66 attempts from the field.

Kent turned the ball over 14 times and were outscored 56-22 in the paint on the afternoon.

“We got some good looks, but we were missing layups at times,” Starkey said. “Part of it was certainly their defense, but the other part of it was our lack of finishing.

The Flashes did not have a player in double-digit scoring and were led by Blackford with nine points, junior guard Mariah Modkins with eight points and redshirt junior center Linsey Marchese with six points.

“Clare Kelly came off the bench and gave us a spark with seven offensive rebounds. She played really hard and it was nice to see that,” Starkey said.

Juhasz grabbed a game-high 10 rebounds for Ohio State, achieving her 24th double-double on the season.

A bright not for Kent State was sophomore guard Katie Shumate returned to the lineup after having knee surgery in the offseason.

“She’s been practicing and we’ve been bringing her back a little bit,” Starkey said. “She’s not 100% and kind of a work in progress moving forward. She’s talented and healthy enough to play, but she’s going to have to continue to gain muscle endurance and strength as we move forward.”

Kent will be back in action at 2 p.m. Saturday for the team’s home and Mid-American conference play opener against MAC East Division co-champions Ohio University (2-0). Ohio is coming off a victory against top 25 team Notre Dame

“[Ohio] is a team with two of the more dynamic scorers [CeCe Hooks and Erica Johnson] in the conference and either one of them could be conference player of the year this year,” Starkey said. “They’ve got a lot of experience, so you’ve got an experienced team playing with a ton of confidence after their first two wins. They’re a completely different style of basketball than what we just faced.”