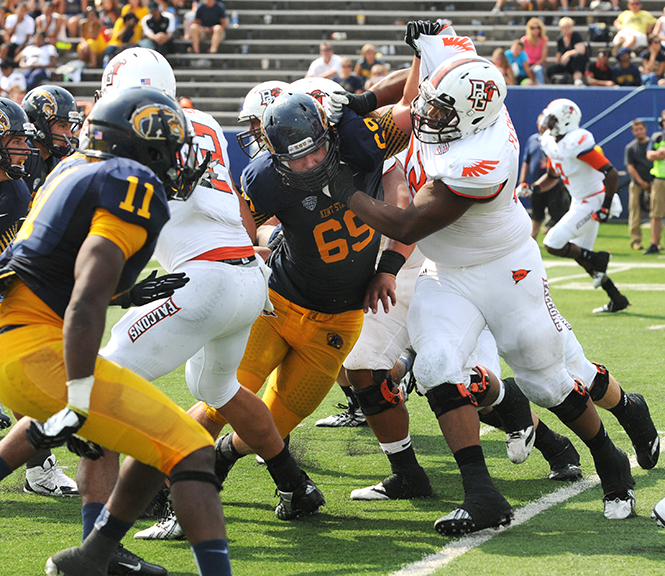 Sunday was a day of reflection for the Kent State football team.

Coming off of a 41-22 defeat at the hands of Bowling Green on Saturday at home, the offense was left to review how they amassed a mere 55 yards and went scoreless in the second half.

After allowing Bowling Green to post offensive numbers not seen by the Falcons’ faithful since the early 2000s, the Flashes’ defense also took a collective step back to examine just what went wrong.

“Any time you give up 40 points and 600 yards, you really reevaluate yourself first, see what I did during the week preparation-wise,” senior safety Luke Wollet said. “Then you go back to what we did as a defense, what we did well and what we didn’t do well. A lot of it comes down to how we did things during the week […] a lot of the things are fixable.”

“There’s a lot of simple stuff that we messed up on. We can’t have it back, we just learn from it, and that’s what we’ll try to do this week.”

Kent State will have to fix those mistakes in a hurry, as they are set to travel to Baton Rouge, La., to face No. 8 LSU Saturday. The Tigers, a perennial contender in both the powerhouse Southeastern Conference and the national title hunt, are coming off a 56-17 triumph against University of Alabama at Birmingham on Saturday and will undoubtedly be the Flashes’ toughest opponent in 2013.

Film study of the loss to Bowling Green revealed plenty of mistakes — which players and coaches alike blamed on mental errors — made by the Flashes in a game that began as a shootout but ended in a blowout.

“You always analyze everything a little bit more after a loss than you do after a win,” head coach Paul Haynes said. “We sit there and look at what we’re doing at halftime to make sure that we’re doing the right things at halftime to get them ready to come out and perform like they did in the first half.”

The Flashes performed well in the first half offensively, scoring 22 points and gaining 247 yards of total offense. The defense struggled all day, allowing Bowling Green to gain 219 rushing yards on 49 carries. Bowling Green’s success on the ground is a point that Haynes said the defense will have to address as a unit before facing Lousiana State University, a team that has rushed for more than 300 total yards in two games this season.

“You make [the opposing running back] stop and start again, we’ve got to get 10 other guys to the ball,” Haynes said. “That’s a group effort.”

“The opponents know exactly where [Durham] is and he’s getting keyed on,” Haynes said. “Guys are keying on [Durham] a little bit more, loading the box, making sure that they know that they’ve got to get three or four hats on him to get him down.”

Durham did score a touchdown, but with the Flashes playing from behind during the entire second half, handoffs between the tackles were virtually eliminated from the playbook. Haynes said Archer is likely to suit up for Saturday’s game at Lousiana State, given that he feels healthy enough to play.

Archer’s return will start slowly, with the coaching staff working him first into individual drills, followed by group and team drills. Haynes was sure to note that both Archer and offensive lineman Pat McShane, who started in Saturday’s loss after missing time due to a knee injury, should be treated with caution with long-term goals yet to be achieved.

“We’re going to look before the game, see where he is and see if he can be effective,” Haynes said.

Positive conclusions from Saturday’s loss include the continued improvement of Reardon, whom LSU head coach Les Miles described as “a quarterback that can really throw it.” Reardon turned in a nice statistical day, completing 15-of-28 passes for 164 yards and two touchdowns. The brightest spot of the afternoon came in the form of Roosevelt Nix, who finished with six tackles – four for a loss – and a sack.

With film study of Saturday’s loss now in the past, the Flashes will take the practice field this week with their focus on improving as a team and with their eyes on this weekend’s trip to Tiger Stadium.

“When we play bigger teams, when we’re the underdog, I think ‘why not us?’ ” senior center Phil Huff said. “ ‘Why can’t we win this game? Crazier stuff has happened. Why can’t we beat them?’ ”

Kickoff is set for 7 p.m. Saturday in Baton Rouge.