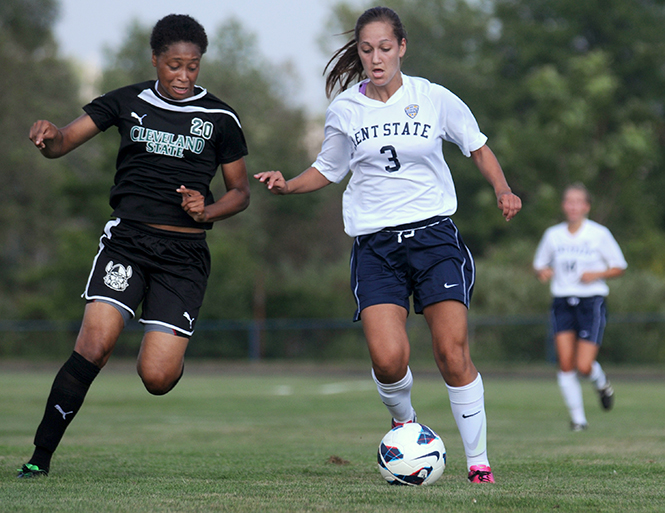 The Kent State women’s soccer team will remain on the road this weekend as it travels to Cincinnati to play the Bearcats on Sunday at Gettler Stadium.

The Flashes have been training and practicing all week through changing weather to prep for Cincinnati this weekend. Head coach Rob Marinaro said he has been happy with the way his team continues to move forward, and he hopes to see the players improve each and every game.

Marinaro has been especially proud of the defense’s level of play. On that side of the ball, the Flashes have only given up six goals all season and gave up just one goal last weekend in their two-game series against Coastal Carolina and the College of Charleston.

“We were under a lot of pressure [last weekend] and with one goal over the entire weekend, that’s definitely kudos to the entire [team],” Marinaro said.

Senior Jessacca Gironda said the team’s ability to shut down opponents’ scoring opportunities is not only a tribute to the defense but also a mark of how well the team as a whole has prevented opponents from gaining any sort of offensive momentum during games.

“We need to defend as a whole unit, starting with the forwards, the midfielders and defenders, and not give [the opponent] time and space,” Gironda said of the team’s defense. “We need to eliminate any stakes [the opponent] has, and we’ll definitely make it easier on our back four.”

Marinaro said he is also looking for his offense to keep trying to create more scoring opportunities as the team progresses this season. Although the Flashes have outshot their opponents 87-71 so far, they have had trouble scoring a lot of goals. Only six of Kent State’s 32 shots on goal have put the Flashes on the board.

“We need switch the point of attack [to] create some good one-on-ones and two-on-two opportunities, so if we continue to do that, we will definitely produce more scoring opportunities,” Gironda said.

Kent State is coming off a close win 1-0 against the College of Charleston last weekend. The game between the Flashes and Cougars was a fast-paced, back-and-forth contest in which both teams’ offensive statistics were virtually identical throughout the entire game.

Sunday’s action is set to begin at 1 p.m. Live game coverage and statistics can be viewed online from the CBS Sports College Network.