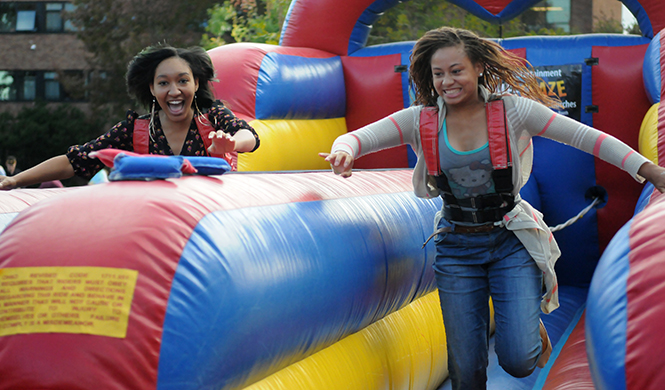 Twenty-three student organizations and offices provided students with information about on-campus resources. Student organizations set up booths where residents could talk to representatives and learn more about what Kent State has to offer. Among the groups represented were Fusion, Office of Health Promotions, EXCEL, CCI Commons and the Honors College.

“They got a chance to talk about their services, like what it is that they do, and give out promotional materials to students at their offices,” said Joshua Roush, assistant residence hall director of Stopher and Johnson halls, who helped organize the event. “I think of it as a mini resource fair where students are able to come and see offices.”

Apart from being educational, Roush said that the event was meant to be a celebration of the community in the Quad.

Matt Amendola, a Lake Hall resident assistant, said that the event attracted 300 to 400 people just in the first hour. Amendola was in charge of the planning committee that helped put the event together.

“It’s good to have events like BlastOff and [QuadFest] for the resource aspect of it,” Amendola said. “But a lot of times, if students go to the Black Squirrel Festival, they are getting the same thing that they get from BlastOff and Welcome Weekend. I guess with ours, it’s the community block party that is more of an important aspect of it than organizations.”

Amendola said that the festival had a ticket system. By participating in games, talking to representatives and engaging in other activities, students were able to earn tickets that they later exchanged for food and drinks.

Abayomi Asokeji, a freshman Lake Hall resident, attended the event with his friends.

“You get to go to the different stations that they had set up,”Asokeji said. “They give you tickets and you ask questions and listen to them talk. There was a whole bunch of activities.”

Students were able to purchase food with their tickets, including kettle corn, slushies and corn on the cob.

Even though the festival was open to both campus residents and commuters, Amendola said that it was marketed more toward the resident hall students in the Quad area.

“It’s a tradition,” Roush said. “We have it every year, so the plan is that it would happen again next year. We’re always looking for ideas and to have students have some input on that.”

Roush said the tradition has been an ongoing program since early to mid-2000s.

Amendola said that the plan for the next year is to expand it to more than just the Quad, to make it even bigger and better.