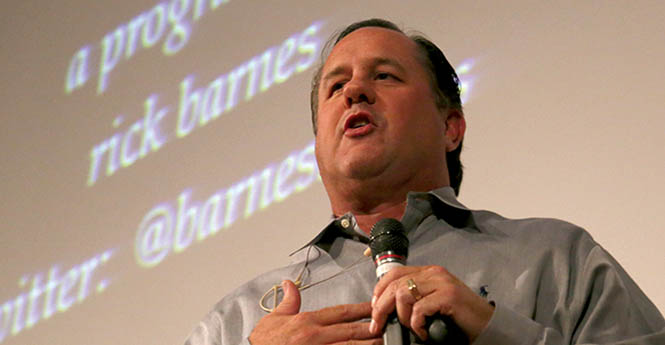 Life and Career Coach, Rick Barnes, speaks in the Student Center about hazing in Greek life on Monday Sept. 23, 2013. Photo by Brian Smith.

Representatives of a number of fraternities and sororities gathered in the Kent State Ballroom on Monday night as guest speaker Rick Barnes addressed the issue of hazing.

“We are the best people at hazing, yet I don’t think we know what it is,” Barnes said as a fellow Greek member.

For 43 consecutive years, there has been at least one fatality in fraternities and sororities nationwide because of hazing, Barnes said, and since the beginning of this year, there have been six deaths.

Barnes, a representative from educational speaker provider CAMPUSPEAK, said that he defines hazing as “unfair expectations of a person for the purposes of joining an organization.”

“You need to be careful how you define [hazing]. If your definition is too specific, you’ll have people who want to violate policy looking for an exception,” Barnes said.

According to Ohio law as presented in Barnes’s speech, consequences can be brought against anyone who committed or tolerated the act of hazing.

Other definitions Barnes mentioned were any actions that do not contribute to the positive development of a person, anything demeaning or disgraceful and anything required of new members not required of old members.

Barnes not only taught the crowd the definition of hazing but also suggested a number of solutions to help eliminate hazing in both fraternities and sororities.

Each organization needs to foster unity with all other members, he told the audience. Barnes said that the groups “subdivide the chapters” to the point where students from all different years sit in opposite sections.

Barnes also suggested making it a higher point to promote scholarship in such organizations.

After Barnes, a three-sport athlete and class president in high school, came to college, he struggled early on in his first year to the point his family received a letter from the university. Barnes’s father, who also served as his high school principal, told his son that he had received an academic probation and that he needed to join a group that would help him raise his grades.

“[Joining my fraternity] was the best decision of my life,” Barnes said.

Barnes concluded his presentation by asking one final question: When will the hazing end?

Danica Gazzigli, junior integrated health studies major and member of Alpha Phi Delta, said she thought the speech was informative but is unsure if it will spur any changes.

“It’s hard [to say if it will spur changes] because there isn’t hazing in sororities,” Gazzigli said. “[The program] talked about the definition, and it was able to help your chapter realize anything can be hazing. It’s a really big issue.”

Barnes made his first trip to Kent State as part of National Hazing Prevention Week. He said he chose to speak on hazing after reading about Chicago high school students taking a powderpuff football game too far.

He said a group of junior girls assaulted their opponents, a group of sophomores, and the event recieved national attention.

“I hope [the students] learn something from the topic and make the commitment to do things the right way,” Barnes said. “[The presentation] is not just about policy but also about replacing bad behavior with good behavior.”

Jimmy Miller is the student finance reporter for the Daily Kent Stater. Contact him at [email protected]