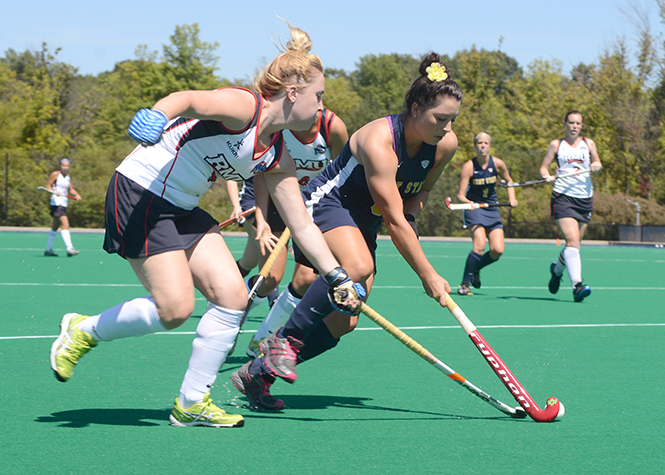 Kent State senior Rebecca Lee rushes towards the goal during a exhibition game against Robert Morrison on Friday Aug. 23. Kent State went to East Lansing, Mich. over the weekend and won a match against Monmouth University but lost against Syracuse University. . Photo by Melanie Nesteruk.

The Kent State field hockey team earned a split of its two games at the MSU invitational, defeating Monmouth 5-1 on Friday and falling 6-2 to No. 5 Syracuse Sunday afternoon in East Lansing, Mich.

The Flashes (2-2) got off to a fast start Friday against the Hawks as senior Rebecca Lee scored a pair of goals at the fifth and seventh minutes of the first half to give her team a quick 2-0 lead. Junior Julia Hofmann extended the Flashes’ advantage with her second goal of the season in the second half.

Hofmann scored again at the 67-minute mark as Kent State pulled away from the Hawks and held on to their lead for the remainder of the game.

Despite holding a 1-0 lead through most of the first half Sunday against Syracuse, The Flashes were overwhelmed by the Orange, who scored five of their six goals in the second half of play. Senior Sabrina Binder scored the Flashes’ lone second-half goal off a rebound from Syracuse’s goalie at the 57th minute mark, but her goal was negated less than a minute later by a goal from Syracuse’s Tayler Evans.

The Orange outshot the Flashes 11-5 in the second half and 24-8 for the entire game.

The Flashes will stay home this weekend to play a pair of games against Saint Louis on Friday and Villanova Sunday at Murphy-Mellis Field. Friday’s game will begin at 1 p.m., and Saturday’s game is scheduled to start at noon.