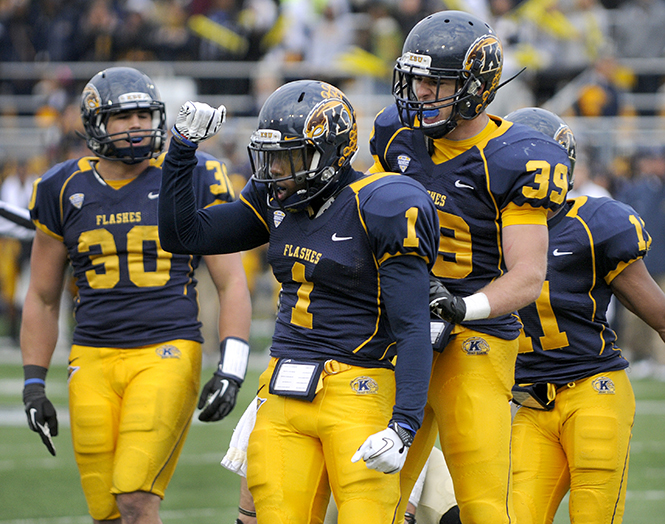 Senior running back Dri Archer celebrates with teammates after a successful tackle during the first half of Kent State's Homecoming game on Oct. 18, 2012. The Flashes triumphed over the Broncos 41-24.. Photo by Hannah Potes .

Dri Archer swayed slowly at midfield, his helmet hanging in hand near his waist and his other hand clutching the collar of his shoulder pads as he watched practice.

Observing his teammates and cracking a few half-smiles is essentially all the standout running back did during Kent State football practice Tuesday afternoon.

Archer, a 5-foot-8, 175-pound playmaker has been out of commission since Thursday, and the possibility of him playing in the Flashes’ upcoming game Saturday at home against Bowling Green remains up in the air. The same goes for senior offensive lineman Pat McShane, who has yet to play in 2013 after injuring his knee during preseason camp and spent his Tuesday observing practice like Archer.

Head coach Paul Haynes had three words when asked about the status of the two, who weren’t available to the media after practice.

Archer injured his left leg during the first quarter of the Flashes’ 17-10 season-opening victory over Liberty on Thursday and returned for one more carry in the second before leaving the game for good. Since then, the most action he’s seen has come in the trainers’ office.

A vital component to Kent State’s two-headed rushing attack, Archer’s absence against Liberty undoubtedly affected the Flashes’ ability to move the football. Luckily for Kent State, redshirt freshman quarterback Colin Reardon and the offense were able to overcome their struggles to pull out a one-score victory. Facing a much tougher defense this week in Mid-American Conference opponent Bowling Green, Archer’s health becomes all the more important.

Should he be unable to play, the pressure will fall squarely on the shoulders of the second member of Kent State’s dynamic duo of running backs, junior bulldozer Trayion Durham.

“Without Dri, with Dri, I’m still going to do my job,” Durham said. “Dri’s getting treatment, so he’ll probably be healthy before the game. I just know I’ve got to do my job and won’t have to worry about Dri.”

Durham, who Haynes has said will be expected to take most of the carries, rushed for 92 yards on 21 carries against Liberty. Bowling Green held him to 20 yards on 10 carries in 2012, a game in which Archer exploded for 241 yards and two touchdowns on 17 carries.

The Falcons held up defensively against the run in Week 1 of 2013, limiting Tulsa to 51 rushing yards on 24 carries in a 34-7 Bowling Green win. But despite a staunch effort from the Falcons’ defense, Durham considers his team a force with which to be reckoned.

“Put it like this,” Durham said, “It ain’t no Tulsa coming in here. It’s Kent State. We’re two different types of running teams, and they’ve got to worry about stopping three people: me, Dri and [junior running back Anthony] Meray.

“It’s going to be a three-person show, plus Colin [Reardon] and the rest of the team. We’ve got so many weapons, they can’t just key on one.”

Practice continues today for the Flashes, who will host Bowling Green at noon Saturday at Dix Stadium.