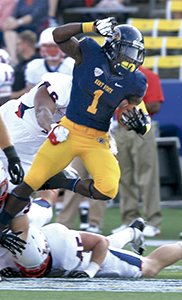 Dri Archer is caught by the Liberty defense during the game at Dix Stadium on Thursday, Aug. 29. Kent State won 17-10. Photo by Brian Smith.

Kent State started the 2013 regular season with an ugly, grind-it-out 17-10 victory at home against Liberty.

The Falcons convincingly defeated Tulsa 34-7 on Aug. 29, gaining 396 total yards and shutting out the Golden Hurricane until 5:56 left in the fourth quarter. Five players combined to rush for 233 yards on 53 attempts, with sophomore Travis Greene leading the way with 88 yards.

However, it was Bowling Green’s defense and special teams that made the difference in the victory. The Falcons held Tulsa to 51 yards rushing and forced two fumbles, while the punt-return unit opened an alley for return-man Ryan Burbink, who took the punt back 67 yards for a touchdown.

Kent State (1-0) plays host to Bowling Green (1-0) at noon Saturday at Dix Stadium, in a match up between the Mid-American Conference East Division’s top two teams in 2012.

Running back Dri Archer’s status remained day-to-day Thursday, meaning the electrifying back’s status is still uncertain for Saturday against the Falcons. Whether Archer is able to play or not, Flashes head coach Paul Haynes said his offense will stick to its run-first philosophy, no matter the opponent.

“I think the more that you can run the football, it opens up the passing game a little bit for us,” Haynes said Monday. “If we can sit there and pound it, and continue to be effective in our run game, I think our passing game will be even more effective.”

With Archer still uncertain for Saturday, fellow running back Trayion Durham will likely shoulder the load on the ground, along with Anthony Meray. Seeing quarterback Colin Reardon hand off to Durham will become a recurring theme in 2013.

Durham carried the program 21 times for 92 yards in the victory against Liberty last week, and is looking for a big game against Bowling Green after rushing for a mere 20 yards on 10 carries against the Falcons last season. The addition of Archer should undoubtedly take some pressure off the back of Durham.

Bowling Green’s backfield includes freshman William Houston, who won Mid-American Conference East Division Player of the Week honors after scoring three touchdowns, each from one yard out, in the victory over Tulsa. Haynes stressed the importance of stingy defensive play on Saturday.

“It’s always important,” Haynes said Tuesday. “If you don’t play good defense, you’re probably not going to win. I think both sides, I’m sure they’re stressing it and I know we’re stressing it, there’s a lot of big plays that have been given up. We can’t do it.”

The match up between Kent State and Bowling Green doubles as the conference opener for both schools and is likely to produce thrilling results similar to the Flashes’ 31-24 MAC East-clinching victory against the Falcons in November 2012. Getting the first conference win means very much to Haynes, who will be looking for his first MAC triumph as a head coach, and his players.

“[A win is] very important,” Haynes said. “You write your own destiny, your own story if you continue to win those games, and when you don’t, you’ve got to get help from other people. It’s super important to get your first win, if not every one of them.”

The Flashes will look to remain unblemished and continue a regular-season winning streak that currently sits at 11 games. Kent State has also won its last 12 conference games and will look to make it 13 straight Saturday.

“Any time you have a conference game this early in the season, it’s important to get off on the right foot,” defensive lineman Roosevelt Nix said Monday. “You can control what you do when you win, especially when you win early.”

Kickoff between Kent State and Bowling Green is at noon Saturday at Dix Stadium.