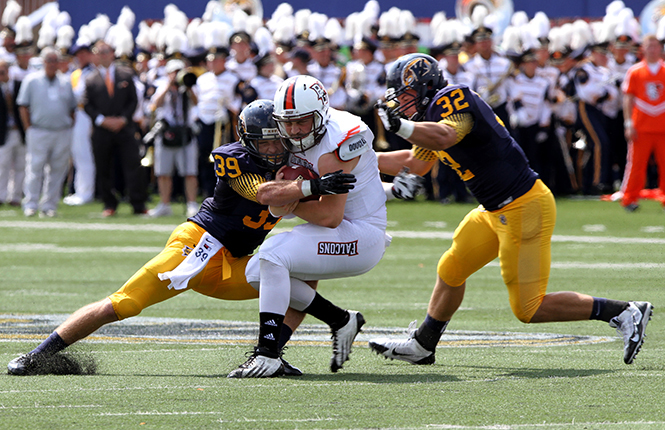 Coming off a 45-13 loss to LSU, the Kent State football team will pack its bags for another road contest in a hostile environment this weekend. The Flashes (1-2, 0-1 Mid-American Conference) will travel to State College, Pa., to take on Penn State (2-1) on Saturday. The Nittany Lions, members of the Big Ten Conference, suffered their first loss of the season Saturday, a shocking 34-31 defeat against Central Florida. Penn State will look to get back to winning when the Flashes come to town for their second meeting at Beaver Stadium since 2010.

Nick Shook: Penn State nearly completed quite a comeback in the loss to UCF Saturday. Would you pin the loss on simply falling behind early and never catching up, or did UCF pose threats that the Nittany Lions simply hadn’t seen up to that point?

Anna Orso: The idea that Penn State nearly mustered a comeback Saturday is still amazing to me because the defense played so poorly in the first half. UCF’s quarterback Blake Bortles is a pro prospect and has a quick-release style that made Penn State’s front seven look irrelevant. But I’d pin the loss on the defensive play. Bortles was good, but Penn State players admitted that it didn’t play its brand of football. The defense recorded zero sacks and couldn’t generate anything that resembled a pass rush. UCF threw right into the face of Penn State’s corners (both are pretty young) and exposed their faults easily. I counted at least 20 missed tackles and several instances when defenders literally whiffed in open space. The defense was slow and ineffective, but they know it. I wouldn’t be surprised if we see a totally different defense this weekend.

NS: Kent State quarterback Colin Reardon is in the midst of his first season as the starter, and while he hasn’t exactly dazzled fans, he has been efficient and hasn’t thrown an interception. What should we expect to see from the Nittany Lions defense against Reardon and the Flashes offense?

AO: So I know that I just ripped apart the defense in my previous answer, but what we saw from several key players in the first two games of the season was solid. In terms of the line, senior DaQuan Jones, a defensive tackle, posted huge numbers in the first two games, recording nine tackles in each and establishing himself as a big, powerful tackle who is really the anchor of the line. On the end, Deion Barnes was the Big Ten freshman of the year last season and was an excellent pass rusher; however, he’s been a bit quieter this season. We’re still waiting on his breakout game. The linebacking corps is anchored by senior Glenn Carson who is the only LB who returned from last year’s monster of a unit. At middle linebacker, he’s been the most productive thus far and may be the only member of the Penn State defense who has posted better numbers than Jones. The Nittany Lion secondary is really what was ripped apart this past Saturday, despite performing pretty well in the first two games. Young corners Trevor Williams and Jordan Lucas each got burned over and over again by opposing receivers last week, but showed serious potential toward the beginning of the season. They’re a toss-up. Penn State’s got four guys who can play safety, and do: Adrian Amos — He’s a former corner who put on some size and is probably the hardest hitter on the defense. He’s playing safety this season, but was briefly moved back to corner Saturday after Trevor Williams’, uh, “performance.” They’ve also got Malcolm Willis, a senior leader, Ryan Keiser, a special teams guy, and Stephen Obeng-Agyapong, who played some outside linebacker this season when Mike Hull was injured. Obeng also lines up as the nickel guy during that package.

NS: How does the Penn State fan base view smaller-school opponents like Kent State?

AO: I like to think Penn State’s fan base is pretty respectful of any school that comes into town, especially if it’s not a huge rival school. I don’t think fans have anything against smaller schools on Penn State’s schedule.

NS: Which PSU players should people keep an eye on Saturday?

AO: Keep an eye on Allen Robinson, No. 8. A lot of defenses will double cover this guy because of the success he saw last year, but he still has this crazy ability to make late breaks and beat defenders. On the defensive side, watch DaQuan Jones, No. 91. This defensive tackle is probably an NFL prospect and seemed genuinely disappointed in his performance from Saturday. Look for him to come up with some big stops this weekend.