From the other campus: Broncos look for first win against Flashes 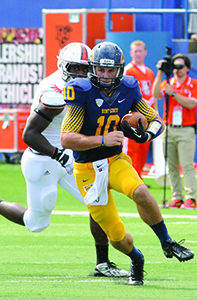 Coming off three straight losses, Kent State (1-3, 0-1 Mid-American Conference) finishes its three-game road trip with a MAC game at Western Michigan (0-4). The Broncos started the season with three of their first four games on the road against opponents from the Big Ten Conference, and also lost a game to Football Championship Subdivision opponent Nicholls State. Western Michigan returns home to host the Flashes, who hope to see an improvement offensively when they welcome back running back Dri Archer and offensive lineman Pat McShane to the starting lineup. Daily Kent Stater football reporter Nick Shook caught up with Western Herald sports editor Jake Nelson to learn more about the Broncos before the two teams face off Saturday at Waldo Stadium in Kalamazoo, Mich.

Nick Shook: Western Michigan has started 0-4, but three of those losses came against Big Ten teams. Has it been a simple case of a tough schedule, or is it something more?

Jake Nelson: The 0-4 start has obviously been disappointing, and you could definitely cite tough scheduling as a reason for the poor performances. However, I think that Western is suffering from a lack of an identity on the offensive side of the ball. Both quarterbacks Tyler Van Tubbergen and Zach Terrell have had poor starts to the season, and while the ground game has shown flashes of something special it hasn’t been consistent enough. I think they took a step backward against Iowa offensively and the special teams let the team down terribly.

NS: The loss to Nicholls State does not fit under the aforementioned explanation. What happened?

JN: The loss to Nicholls State was a serious red flag for the Broncos. I think they came out flat on both sides of the ball for the first half, expecting an easy game. I don’t know what head coach P.J. Fleck said or changed at half-time, but in the second half they performed much better. They came within a drive of winning but just couldn’t close the game out.

NS: Who are the players to watch for WMU?

JN: As far as players to watch, I think the defense as a unit will be quite stout. Defensive back Donald Celiscar and linebacker Kyle Lark lead the unit, and each have put together a pretty good season so far. On offense, I’d keep an eye on wide receiver Corey Davis. He was injured in the last game, but I think he will be able to go this week, and he was averaging 100 yards per game prior to the injury. If Tubbergen can his game sorted out, Davis will have a great game.

NS: How has coach P.J. Fleck handled the tough start?

JN: Coach Fleck has remained very positive about this team, even in the face of adversity. He understands that implementing his system and teaching this group of kids is going to take time, and as he says he and his team are focused on “rowing the boat,” no matter what. I think that his efforts to promote the football team around the community have been effective, and in another season or two we will start seeing serious results on the field.

JN: I think that we have a low scoring game this Saturday, but I can’t see this team dropping five in a row. Fleck ran a tough practice Sunday night, and the Broncos will come into this game focused and win 21-17.