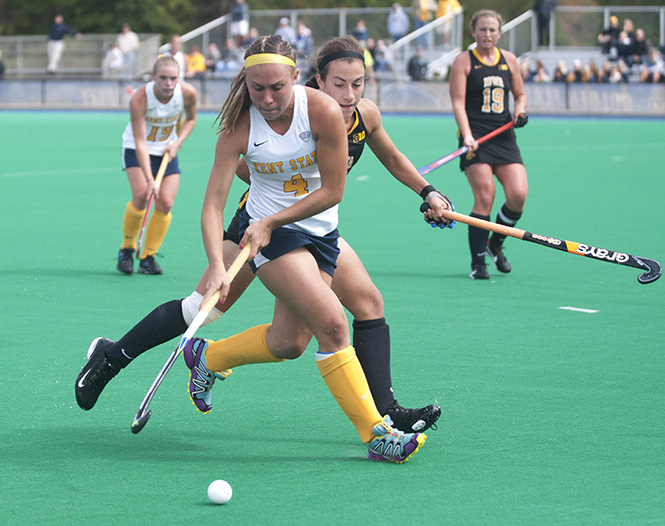 Hannah Faulkner blocks the puck from an Iowa opponent on Sunday, Sept. 22, 2013. Kent State lost to Iowa 0 to 6. Photo by Brianna Neal.

Following a 6-0 shutout loss to the Iowa Hawkeyes on Sunday, the Kent State field hockey team will host the Ohio State Buckeyes in the final game of the current homestand at 2 p.m. Tuesday at Murphy-Mellis Field.

The Flashes (4-4) will prepare to face the Buckeyes for the seventh straight season and first time since they fell to the Buckeyes 8-2 last September. Ohio State leads the all-time series against Kent State, 20-6.

The Buckeyes (2-5) will be the second of three Big Ten Conference opponents that the Flashes will face this year, joining Iowa and the Northwestern Wildcats. The Flashes will take on the Wildcats on Oct. 6 at home.

Scouting the Buckeyes: Ohio State graduated Danica Deckard, who led the team in points last season with 33 and added three goals and an assist in the Buckeyes’ most recent defeat of the Flashes. The Buckeyes also lost Berta Queralt and Paula Pastor-Pitarque, their second- and third-leading point scorers respectively, to graduation.

Junior goalkeeper Sarah Lemieux, a newcomer to the Buckeyes’ squad, leads the team with a 2.03 goals-against average. Nine Ohio State players have registered a point so far this season, five of which have started every match for the Buckeyes this year.

Kent State currently boasts two of the Mid-American Conference’s top offensive weapons in sophomore Julia Hofmann and senior Rebecca Lee. Hofmann leads the conference in points (16) and goals (6), and her four assists this season puts her in a three-way tie for the conference lead with teammates junior Abbie Carrico and senior Alyssa McFerren.

Lee leads the MAC in total shots with 40 and is second behind Hofmann in points with 11. Junior goalkeeper Jahna Jordan has 43 saves this season, good for fourth among all goalies in the conference.