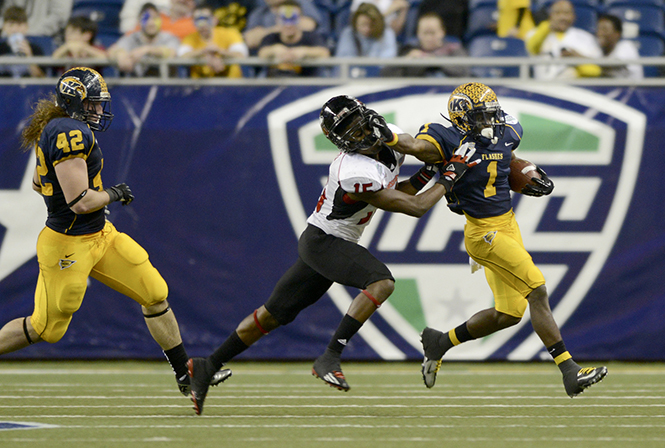 Senior running back Dri Archer (right) is pushed out of bounds during the MAC Championship game on Nov. 30, 2012. Photo by Matt Hafley.

Kent State is finally back on track with a victory at Western Michigan on Saturday.

Now, the Flashes prepare for their biggest challenge yet as they get ready to host Northern Illinois this weekend.

NIU’s arrival creates a rather important Saturday for Kent State. The Flashes (2-3, 1-1 Mid-American Conference) will face the undefeated Huskies (4-0) for the first time since they lost in double overtime in the 2012 MAC Championship Game.

The Flashes are definitely aware of the difficulty that will come with facing NIU, who is coming off of a resounding 55-24 victory against former Kent State head coach Darrell Hazell and the Purdue Boilermakers.

“I think this is the toughest football team we have played,” Flashes head coach Paul Haynes said. “I know everybody sits there and says, ‘Well, wait a minute, [you played] LSU […] they’re not very complex.’ [NIU] is very complex. You have to be very, very sound on defense because they can expose you with a lot of different formations and a lot of different plays that they run.”

Dual-threat quarterback Jordan Lynch, considered by many to be the MAC’s best player, leads the Huskies on offense. Lynch’s play, which has ranked him 14th nationally in total offense, is a big reason why NIU is undefeated, and he gave the Flashes all kinds of problems in their last meeting. Haynes thinks a game plan based on keeping Lynch from making big plays is a recipe for disaster.

“I don’t think you can,” Haynes said with a chuckle. “I really don’t. I don’t think you can contain him. I think you’ve got to minimize his big plays. The thing that happens is, when you put so much emphasis on him, he’s got a lot of playmakers around him that have big games when you try to overcompensate for him.”

Kent State is pleased with the way all three units of the team performed in the win against the Western Michigan Broncos. For the first time this season, the Flashes found success running the football, which has been a point of emphasis since Haynes arrived.

Keeping the ball in the offense’s possession and out of the hands of Lynch will be key for the Flashes against NIU.

“That’s where it all starts, for us to be able to run the football,” Haynes said. “The best defense is the one sitting on the sideline. Our ability to keep the clock moving and our ability to move the chains is going to be big for us this week.”

Running back Dri Archer had a big effect on the Flashes’ offensive success against Western Michigan in his first game back from an ankle injury, and he said after the win, he feels good and ready to go against Northern Illinois.

Kent State brings a rushing attack that includes Archer and running back Trayion Durham, who rushed for 154 yards and two touchdowns on 26 carries against the Broncos. But before the Flashes can employ their “thunder and lightning” backfield duo of Archer and Durham, they must first stop Lynch and the Huskies’ offense.

Kent State did well defensively against Western Michigan, forcing two turnovers and holding the Broncos to a 33.3 percent success rate on third down. More of the same will be needed if the Flashes hope to emerge victorious against Northern Illinois.

“It’s going to be huge that you can get off the field on third down, and don’t give them extra plays and opportunities,” Haynes said. “I think it all starts with winning first down, though. That’s the most important down. Because then you can get them in third-and-long situations to maybe try to minimize what they’re doing.”

Although the Flashes are hosting NIU at Dix Stadium for their Homecoming game, they are considered the underdogs against the Huskies. But that doesn’t affect them, Haynes said.

“They’re a good football team,” Haynes said. “You look at the things that they have done this year and last year, it’s not like they aren’t deserving. But that’s why the game is played. If we all went off of the experts, they’d already have the name on the trophy of the guy that is winning. Our guys are hungry to go out there and compete.”