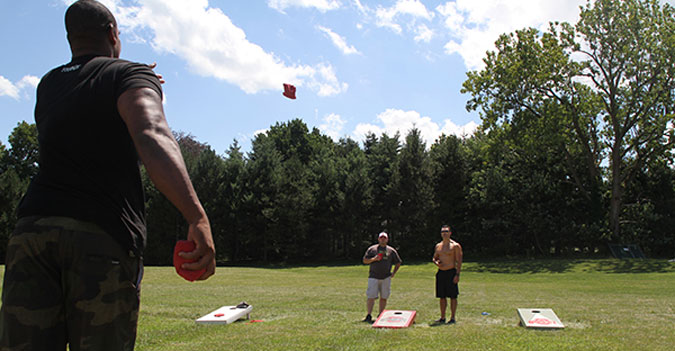 The two biggest arguments Scott Hamilton ever had with his son, Adam, were about getting a tattoo and joining the Army.

Hamilton didn’t want Adam to do either, but he did both.

So it was a big surprise when Scott had a military emblem tattooed to the back of his calf, right before his son shipped off.

Now, more than two years after his son’s death, Scott’s tattoo takes on a new meaning.

“I sure wear mine proudly,” he said.

The event raises money for a scholarship awarded to two students — one male, one female — from Adam’s alma mater, Kent Roosevelt High School.

The scholarship is awarded to students who have lettered in three sports.

Adam was a notable athlete. He was all-American in lacrosse, holds records in ice hockey and played football.

The Adam Hamilton Scholarship is a $10,000 renewable award.

“I personally knew Adam,” Manning said. “I idolized him.”

He said he wanted to be like Hamilton on the ice and styled his hockey game after him.

Scott said that Adam had the ability to touch people and was a natural leader.

“This scholarship is another branch of him reaching out and changing lives,” Scott said.

Alexander Nichols, vice president of the Kent State Veterans Club, said the event was about “respect and remembrance.” He said the veterans club’s involvement in planning and executing the event starts months before the tournament date.

“Because it’s for a fallen soldier, it means a lot to us,” he said.

Brandon Hamilton, Adam’s brother, described the event as “a bunch of friends coming out to play cornhole and raise money for a scholarship.”

“He always brought a smile to everyone’s face,” Brandon said.

Although Adam was amazing at many sports, cornhole wasn’t one of them, he added.

He said that Adam held a cornhole tournament for fun the year before he passed, and their cousin Josh Collins picked it up and turned it into a memorial event and fundraiser.

Scott Hamilton was thankful that Adam meant something to the community.

“It took a pretty big kid to get that,” he said.

“When he walked in the room you knew who he was. When he left, you were smiling — or wanting his number.”