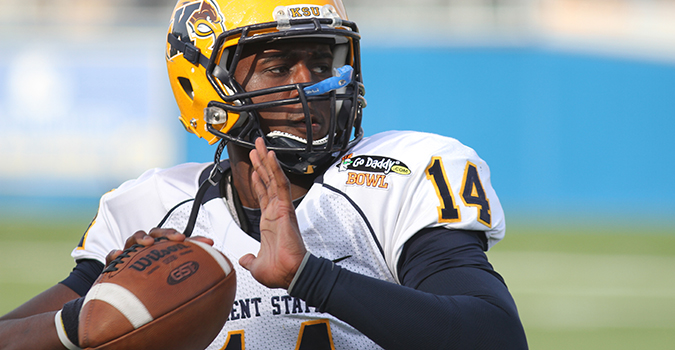 Junior quarterback Brett Maxie warms up before the start of the annual Spring Game at Dix Stadium on Saturday, April 27, 2013. The Blue overwhelmed the Gold, defeating them 31-0. Photo by SHANE FLANIGAN

Paul Haynes has stepped foot on the Dix Stadium field plenty of times in his life, but Thursday will mark a first in Haynes’ time at Kent State.

The Flashes’ new leader will take the field before a game for the first time as head coach, when Kent State takes on Liberty in the two schools’ season opener. Haynes would be remiss if he said he wouldn’t feel different in his first game at the helm of the program, but he wasn’t shy about what might be running through his head moments before the ball is teed up.

Haynes, a former standout safety at Kent State, takes over for departed coach Darrell Hazell, who led the Flashes to their best season in school history in 2012. Last season will officially be history when the ball is kicked off at 6 p.m., as the Flashes start their Mid-American Conference East Division title defense.

Liberty, a member of the Football Championship Subdivision, presents an unique challenge for Haynes and his staff in their first game at Kent State. Flames head coach Turner Gill elected not to exchange film with the Flashes staff in the week leading up to the season opener, making it a bit more difficult to prepare for the game. Haynes chose to focus instead on his own players, making sure they are prepared to open the season at home.

“I think you’ve just got to concentrate on yourselves,” Haynes said. “Cover three is cover three, quarters is quarters and cover two. They do one of the three. We’ve just got to keep preparing.

Liberty finished 2012 winning six of its last seven games, including a victory over Stony Brook, which was ranked sixth in the nation in the FCS. The Flames took on one Football Bowl Subdivision opponent in 2012 and came away with a narrow 20-17 defeat at the hands of Wake Forest. The Big South co-champions averaged over 400 yards per game on offense last season and ranked 15th in the FCS in defense, allowing 314.7 yards per game.

When it comes to the Flashes’ offense, they may be even more dangerous in 2013 than they were in 2012, when they posted a perfect 8-0 record in the MAC. Kent State said goodbye to quarterback Spencer Keith, who graduated after the 2012 season, but very little will be lost with redshirt freshman Colin Reardon, who won a preseason camp battle with senior David Fisher, under center.

The Flashes also welcome back a key playmaker from their 2011 team in redshirt senior receiver Tyshon Goode, who was forced to watch the historic 2012 season from the sideline due to a hamstring injury that kept him out for the year. With a long-awaited chance to return to the turf arriving Thursday, it’s likely that no one is more eager for the game than Goode.

“Words can’t even express how I’m going to feel coming out of the tunnel and touching the field,” Goode said. “It’s going to be great for me. I missed a whole year of football. I’m going to be like a kid in a candy store.”

When it comes to Liberty, Goode knew enough basic details to be ready for his opponents.

“They’ve got two experienced corners on the outside, I hear,” Goode said. “I heard they like to play a little physical, but you know, I’ve just got to stick with the gameplan and do what Kent State does.”

Kent State returns a dynamic duo in the backfield in running backs Dri Archer and Trayion Durham, who combined for 2,745 rushing yards last season. Archer has garnered plenty of attention for his outstanding 2012 season, but with last season well behind him, the Heisman Trophy hopeful knows it is time to make more plays with the ball in his hands.

“[A victory over Liberty is] real important, this could determine your season, whether you’re going to go uphill or downhill,” Archer said. “You always want to start a season off on a good note with a win, so we’ll just keep getting in our playbooks and just study film and we’ll be ready to play come Thursday.”

Defensively, three-year starters Roosevelt Nix and Luke Wollet are back to lead the unit that finished fourth in the FBS in turnover margin with a mark of plus-20. Nix is currently second among active FBS players in career tackles for loss and fifth in forced fumbles and has the chance to become the fourth player in MAC history to be a four-time first team all-conference selection. Nix has taken this into account and plans to be a major headache for opposing coaches.

“My approach to this season is definitely just wreaking havoc on offensive coordinators,” Nix said. “I want to be a hassle to everybody I come against. When I play like how I want to play and will play, those awards will come. It’s an honor to be named to anything like that, to be recognized for the ability to play the game that I love.”

The Kent State defense has holes to fill after the departure of key defensive players, but Wollet is confident in his new fellow starters.

“They’ve done a good job,” Wollet said. “We’ve asked a lot of them and they’re really responding to the challenge. We’ll see how far they’ve come when we play Liberty.”

For Wollet, as well as Nix, Archer and Goode, it will be their final season opener as a member of the Kent State football team. The senior safety said the magnitude of the game will likely be a future realization, but he’s well aware of the importance of starting the season off with a victory.

“I feel the same as I felt every first game, truthfully,” Wollet said. “It will probably hit me later in the season, but I’m excited for it. I love this place. It’s always exciting to put all the work in all year and you finally get to have fun for a few minutes out on the field.”