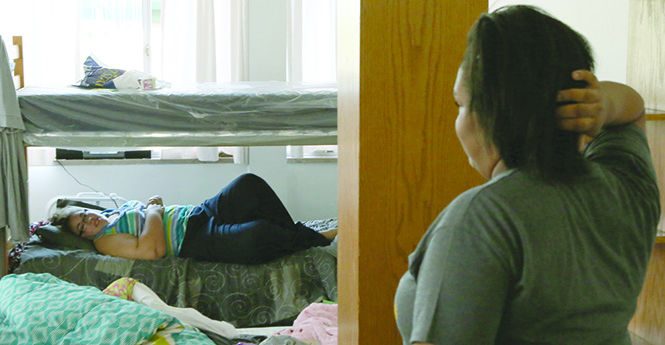 Shaline Thomas, Chemistry major, talks to her roommate Drayona Thompson, Computer Information Systems major, in Fletcher Hall on Aug. 16. Thomas and Thompson are housed in the lounge in the building until a dorm room can be found for them. Photo by BRIAN SMITH.

As she makes her bed on campus for the first time, Drayona Thompson, freshman computer information systems major, talks about how excited her parents were to see her forced into the social experiment of college.

But the experiment that should have centered on the first week of classes and learning the campus map, soon involved her room on campus. Thompson is one of at least 74 students who are out of a permanent room in a Kent State residence hall for as long as two weeks while the university waits for an expected number of beds to open up.

Thompson is living with two other freshmen in the second floor lounge of Fletcher Hall, one of nine residence halls filling their lounges with up to four overflow students each.

Eric Mansfield, Kent State spokesman, said the number of students currently in transitional housing — most are living in lounges, a few with their resident assistants — was expected. Every year, the university anticipates about one percent of students to leave residence housing within two weeks due to cancellation.

“This happens every year,” Mansfield said. “People leave for a variety of reasons.”

Last year, Mansfield said, 68 students found themselves in the same position after university officials said in July that they would not have enough beds.

In February, the university advertised approximately 6,300 beds housed in its 25 on-campus residence halls. It closed residence hall reservation July 2, one month after it stopped accepting applications for admittance.

Mansfield said the university has made every attempt to make the stuck students feel at home, and Thompson agrees. The lounges-turned-rooms are fully furnished with bunk beds, desks and drawers.

“Two weeks is too short,” Thompson said, referring to the university’s goal for moving her into a permanent room. “I like it, personally. People will knock on our door to see what it looks like.”