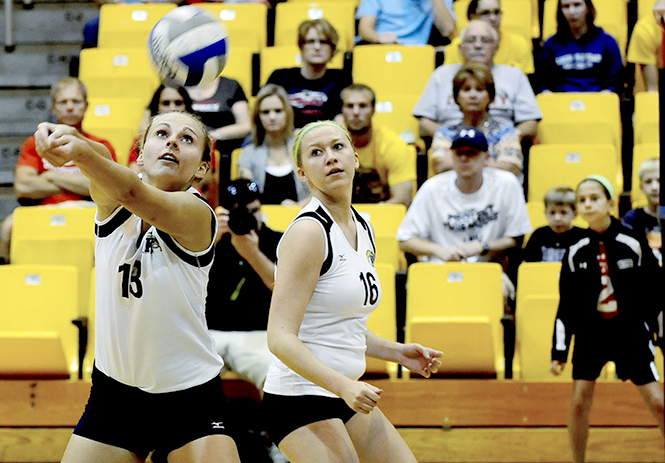 Kent State senior Kathy Krupa (left) bumps the ball over the net during the Flashes' game against Liberty September 5, 2012. Photo by Hannah Potes.

The Kent State women’s volleyball team will open up its 2013 campaign at the Indiana Invitational taking place Friday and Saturday at the Indiana University Gym in Bloomington, Ind.

The Flashes’ first match against the Rutgers Scarlet Knights will begin at 5 p.m. Friday, while Saturday’s matches against the Robert Morris (Pa.) Colonials and the Indiana Hoosiers are scheduled to begin at 9:30 a.m. and 7 p.m. respectively.

Last season the Flashes finished last in the Mid-American Conference East Division with an overall record of 6-22, losing 13 of their 16 conference games. The team will attempt to make major improvements this season with ten letter winners and five starters returning.

Don Gromala enters his second season as the Flashes’ head volleyball coach after being hired in April of 2012 to replace Glen Conley. While the team’s main focus will be to improve its numbers in the win column, Gromala will be keeping his expectations for the Flashes at a high level.

“We are trying to build a solid foundation for the future,” Gromala said. ”But at the same time I think we have high goals as a group. We are establishing ourselves as a competitive team in the MAC.”

Despite only losing one senior to graduation, the Flashes reloaded by welcoming four freshmen into the program during the offseason. The addition of newcomers, together with five sophomores returning from last season, forms the majority of a youthful squad with much room and time to improve.

The overall youth factor of the team will not pose a serious issue in the eyes of Gromala.

Team captain Hannah Herc, one of only two seniors on the team this season, is heading into her final season at Kent State with one specific goal in mind for herself and her teammates.

“We are trying to make it to the MAC Tournament this year,” Herc said. “We want to have a positive season with a winning record.”