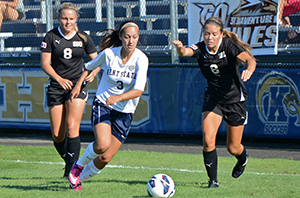 The Flashes (1-1) pulled off their Friday win on a tie-breaking goal in the later minutes of the second half.

With the match tied at two, the Flashes broke through the back line of the Bonnies and took the lead for good on a goal inside the left post by freshman defender Jenna Hellstrom at the 77th minute.

“It’s all about progression, and we need to get better,” Marinaro said. “It was a good start for (the Flashes) today. We want to continue moving forward and always getting better.”

Sophomore midfielder Madison Helterbran opened the scoring for Kent State in the 15th minute off a header assisted by senior forward Jessacca Gironda. The Bonnies netted an equalizer 29 minutes into the match from midfielder Jordan Calabria, just three minutes before Hellstrom scored the first of her two goals to put the Flashes up 2-1.

Kent State began the second half with fluid play that nearly resulted in a pair of goals from Gironda as her first shot on goal hit the crossbar. Gironda’s second attempt at the 61st minute was prevented when Bonnies goalkeeper Christina Sarokon made the save.

St. Bonaventure tied the game again on a successful shot by midfielder Alyssa Lapp at the 66th minute before Hellstrom converted on her second go-ahead goal of the match.

The Flashes managed seven shots on goal in the first half of Saturday’s game against Marshall but went into halftime trailing 1-0 after a header goal by Marshall forward Kristine Culicerto.

Kent State fell further behind in the second half following two goals by the Thundering Herd in close succession. Forward Sydney Arnold snuck the ball past Flashes goalkeeper Stephanie Senn for a goal at the 65th minute, and Culicerto tipped in her second goal of the game at the 69th minute mark.

Despite outshooting Marshall in the first half, the Flashes made only four shots on goal the entire second half.

The Flashes will look to bounce back in their next game against Cleveland State at 5 p.m. Friday.