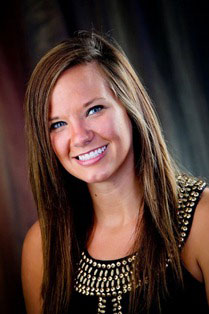 After her journey as a Kent State student and dance team member, alumna Jordan Petersen-Fitts will begin another Kent State journey in August as the new dance team coach.

Since being on the team almost 10 years ago, Petersen-Fitts said she now co-owns Cuyahoga Falls Dance Center with her mother, Beverly Petersen-Fitts, who is a part-time dance instructor at Kent State.

“The team has changed quite a bit since I was on it,” Petersen-Fitts said . “We are looking to make a great team and take them down to the national competition.”

Petersen-Fitts said that the team is working to get the team more involved in community service and at university events.

“I would like to be more involved in the community and organize a dance camp for kids,” said Grace Forbess, senior dance team member.

Forbess and fellow dance team member Elizabeth Henrich said they are excited for a new coach.

“We have built ourselves up and became friendlier with the athletic department,” said Henrich. “We hope to continue in that direction and we feel that Jordan will be able to help us do that. We are excited and we are looking forward to this season.”

Andrea Shearer, Kent State dance division director, said in a press release that it is terrific to have Petersen-Fitts as the new dance team coach.

“Jordan is a natural leader and a gifted choreographer and teacher; her enthusiasm is contagious,” Shearer said. “With her experience on Kent State’s Dance Team, she certainly knows what to do, and she’ll do it very well.”