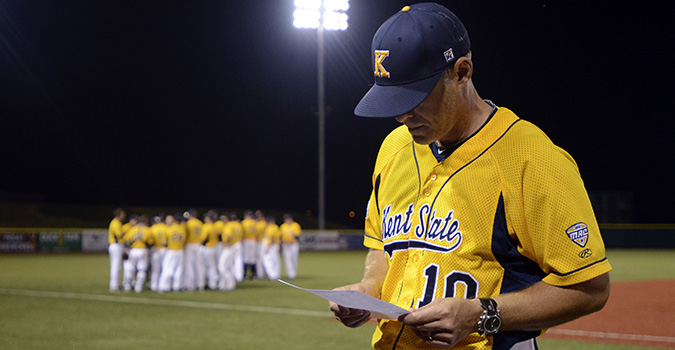 Kent's now former head baseball coach Scott Stricklin is interviewed after the Flashes beat Central Michigan 15-8 in the first round of the Mid American Conference tournament on May 22, 2013. Stricklin left Kent State to become the head coach of the Georgia Bulldogs. Photo by Matt Hafley.

Duncan spent four years with the Boilermakers, helping lead them to a 2012 Big Ten Championship and a team-record 45 wins. After playing his collegiate career at Arizona State, Duncan played professionally for nine seasons with the Mets, Padres, Blue Jays and Dodgers organizations.

Nielsen said the Flashes’ head coaching position has been very attractive since their appearance in the College World Series just more than a year ago.

“It was evident throughout the search,” Nielsen said. “We set out looking for someone that could coach and motivate our current players and incoming class and who is a good role model. Kent State baseball is in good hands moving forward.”

The Flashes will formally introduce Duncan as their new head coach in a press conference scheduled for 2 p.m. Wednesday at the Kent State University Hotel and Conference Center.

Scott Stricklin returned to his alma mater in 2004 to accept the job as head coach of the Kent State baseball team, receiving the first head coaching opportunity of his career. Since Stricklin signed on to head the Flashes, he helped transform the program into a Mid-American Conference powerhouse and propel Kent State to its first ever appearance in the College World Series in 2012.

The credentials Stricklin built during his nine years with the Flashes proved to be appealing to the University of Georgia Bulldogs, who offered Stricklin the opportunity to fill their vacant head coaching position. Stricklin accepted the offer to become the Bulldogs head coach earlier this month, officially ending his tenure with the Flashes.

Stricklin, 41, agreed to a six-year contract with the Bulldogs worth approximately $600,000 per year, according to The Atlanta Journal-Constitution. In a June 5 press conference on the University of Georgia campus in Athens, Ga., Stricklin thanked Director of Athletics Joel Nielsen and other members of the Kent State athletic department while expressing his gratitude for what Kent State and the community meant to him and his family.

“I’ve spent the last nine years of my life raising my family in the Kent community,” Stricklin said. “I can’t tell you how hard it was for me to leave. I want to thank those people at Kent State who were so special for me and my family and took care of us for the past nine years.”

The Flashes compiled an overall record of 350-188 with Stricklin at the helm, which included a conference record of 161-64. Sticklin led the Flashes to five MAC championships, four of which coming in consecutive seasons from 2009 to 2012.

Kent State advanced to its first Super Regional in 2012, where the Flashes defeated the University of Oregon Ducks to clinch a spot in the College World Series for the first time in program history. The Flashes broke a team record with 47 wins, including a 21-game winning streak, and finished among the top five teams in college baseball, their highest ever national ranking.

Stricklin acknowledged his desire and excitement for coaching at Georgia and in the Southeastern Conference as some of the main reasons he chose to leave the Flashes with five years remaining on his contract.

“There might only be one job in the country that I would leave Kent, Ohio for, and that’s being a Georgia Bulldog,” Stricklin said. “I left my alma mater to come to my dream job. This is my dream job at the University of Georgia.”

Joining Stricklin at Georgia will be former Kent State hitting coach Scott Daeley, who was also hired by the Bulldogs to fill the same position he had held with the Flashes. Mike Birkbeck, the Flashes’ associate head coach and pitching coach, turned down an offer to join Stricklin’s staff at Georgia and will remain at Kent State.

The Bulldogs are coming off a 2013 season in which they finished last in the SEC Eastern Division with a conference record of 7-20. Stricklin said his main goal as head coach of the Bulldogs will be to return them to form and bring them success on a national level.