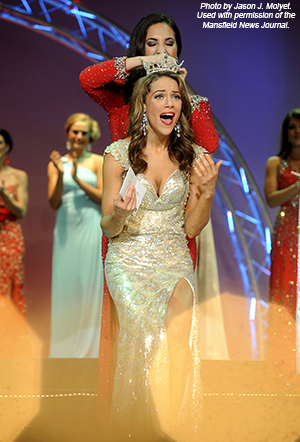 Kent State now has a local celebrity in graduate student Heather Wells, who was crowned Miss Ohio 2013 on Saturday. Wells received her undergrad from Kent State in broadcast journalism and is currently pursuing a master’s degree in nutrition.

The 23-year-old Warren, Ohio native has been competing in pageants from a very young age; her first pageant title was Tiny Miss Canfield Fair at the age of three.

She was reigning Miss Montgomery County before being crowned Miss Ohio this past weekend in Mansfield. Wells’ talent is dancing and her platform is “Divorce Recovery for Youth.” She wants to use her title as Miss Ohio to help kids who are struggling with divorce in their families.

Wells attributes much of her Miss Ohio success to Kent State University as her minor in dance and her time as a broadcast student helped her achieve the highest scores in the talent and interview portions of the Miss Ohio pageant this year.

“Leading up to the pageant, Kent State let me use the facility and the dance studios to practice, and without the tough curriculum focusing on choreography I never would have done as well as I did,” Wells said.

Aside from spending plenty of time in the dance studio working on her routines, Wells also spent time reporting for TV2, Kent’s on-campus student television station, while she was studying broadcast.

“TV2 was definitely one of the best tools I took away from my undergraduate studies at Kent State, and it was so helpful to me in pageants because often times we’re asked to speak impromptu for scoring in the interview round, and having such a strong background speaking in front of the camera and writing really helped me do well in my interviews.”

TV2 adviser John Butte had Wells in class and described her as “a highly polished performer” and said “she was always excited about her career in journalism.”

Rich Pierce is a Kent State alumni who co-anchored with Wells at TV2.

“Heather Wells was a natural joy to have in TV2, she always brought a smile and a friendly attitude and everyone just loved having her around,” Pierce said, “and this award and this honor could not go to a more likable, genuine, just all around great person and I could not be happier for her.”

Although she has to put her master’s degree on hold for the title of Miss Ohio, she has plans for the future, “Once I get my master’s degree I would be a registered dietician and from there I would like to continue working in media and in broadcast with a focus in health reporting.”

Wells says she plans to come back to Kent State in the fall to participate in Homecoming festivities and to talk about her platform, but she also wants to encourage other Golden Flashes to get involved.

“Miss America is the largest scholarship provider for young women in the entire country,” Wells said. “For me I’ve won $30,000 to pay for school. So I think more Kent Staters should get involved.”

Wells will be competing for scholarships and the title of “Miss America” against winners from all 50 states as well as Washington D.C., Puerto Rico and the U.S. Virgin Islands. The Miss America pageant will be held in Atlantic City on Sept. 15 and will be broadcast live on the ABC television network.

Pierce has no doubts that Wells has what it takes to win the title, “I’ve never watched Miss America but I will certainly watch it when she’s there, and if these judges at the competition have any idea what they’re talking about she’s going to win that crown very shortly.”