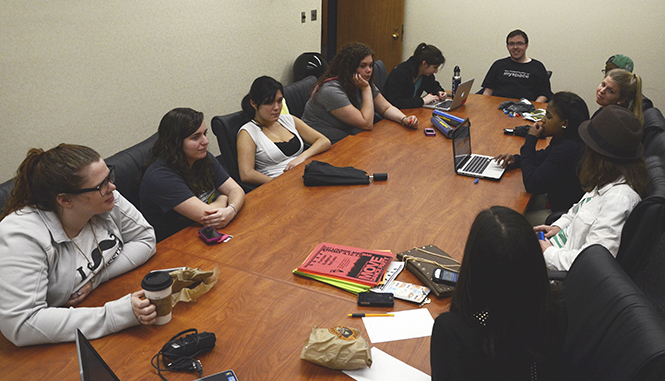 Members of the Kent State Invisible Children Organization discuss upcoming events on their agenda at the meeting on April 10. Events discussed included "Move Dance Party," which is took place at Bar 157 on April 12. . Photo by Zane Lutz.

In March 2012, the virtual world was exposed to the phenomenon that was “Kony 2012.” The 30-minute video, which received more than 94 million views on YouTube by October of that year, was filmed and directed by Invisible Children, Inc., a worldwide organization that aims to draw public attention to Ugandan warlord Joseph Kony and his Lord’s Resistance Army.

According to the video, Kony and his army used brutal tactics to enslave children, forcing them to join his army. The video spotlighted the struggle of these children and pushed viewers to lobby congressmen and celebrities to spread the word.

The speed at which the video went viral also sparked a significant amount of criticism, and many questioned means in which the organization reached its goals.

This spike in membership remained intact throughout the ensuing weeks, and the group raised funds to reserve the auditorium in Cartwright Hall when the RSVP for the event shattered predictions. The group’s “Cover the Night” event also attracted a large number of participants.

As with many viral phenomena, however, interest quickly waned, and the spotlight on Kony faded from the public eye. But committed members of KSU Invisible Children remained focused and driven despite the dip in enthusiasm.

In the last 13 months, the group has continued to work to dismantle Kony’s LRA.

Kristin Mulcahy, senior political science major, was president of KSU Invisible Children during the release of the video.

She said although enthusiasm died down, the initial interest made Kony famous — something that made a huge impact on the future of Invisible Children.

“These things are going to gain support and, after time, the next big thing happens,” Mulcahy said. “We’re still glad it became that big because now everyone knows the name Kony, which is something we never dream could have happened. So it was all worth it.”

Mulcahy attributed a large part of the falling out to confusion and misinformation, claiming the way in which Invisible Children distributes its funding threw a lot of people off.

The organization uses funding for more than just groundwork, she said. In fact, only approximately 32 percent reaches Uganda directly, with the rest spent on filmmaking, travel and staff salaries.

Reshmi Mehta, junior political science major and current president of KSU Invisible Children, said the success the organization has had on a global level would not have been possible without the technological resources utilized. This is why, she said, the funding used on video equipment and editing software is essential.

“The music, the cool editing, compelling images; you need resources to do that,” Mehta said. “If that video didn’t look as cool, or sound as fun, we wouldn’t have watched it.”

Another notable criticism supporters of the movement received was their primary use of social media to spread awareness — an effort that earned them the label “slacktivists,” or those who promote a cause from the comfort of their own homes to feel good about themselves without actually contributing anything.

“I completely disagree that they should get judged, or be judged, for their version of taking action,” Mehta said. “Because you have to realize that in this age, technology is a huge part of our society. So when someone does change their profile picture, they’re saying something.”

Mulcahy said the close-knit, committed group of people still working on the cause at Kent State are able to do what larger, more popular student organizations do as a result of passion and hard work.

“You don’t need 85 members at every meeting,” she said. “The people that we do have are awesome and really care about the cause, and we’d rather have that then some people who think it’s trendy or cool to be there.”

Following the release of “Kony 2012,” the European Union pledged support for efforts to stop the LRA. Both the United Nations and African Union released strategies for intervention.

Students also participated in a nationwide rally in Washington, D.C. on Nov. 15, 2012. “Lobby D.C.” encouraged young people to keep pressure on the federal government by meeting with representatives and senators to talk about the issue.

They would also push Congress to pass an expansion of the Rewards for Justice program, which would offer up to a $5 million reward to anyone with correct information regarding the whereabouts of Kony or the LRA.

More than 20 Kent State students attended the rally, including Mehta.

She, among other members, spoke directly with Rep. Tim Ryan’s council and newly appointed Secretary of State John Kerry, who Mehta said showed overwhelming support for the expansion. The expansion was ultimately passed in January of this year.

Attracting and maintaining youth enthusiasm is something most organizations face, but a key aspect in successfully doing so lies in the presentation of an issue.

Mulcahy said she thinks the key to inspiring young people was best utilized during the group’s first Fourth Estate Leadership Summit in 2011. The summit brings dozens of activists and educators from around the world to speak about social change.

She said the most influential part of the summit was when Invisible Children co-founder Jason Russell spoke directly to the crowd.

“Everyone stood up, looked at each other in just complete silence and just started bawling,” Mulcahy said. “I have never felt more spiritual in my life.”

Invisible Children now focuses on connecting central African villages with the use of the Early Warning Radio Network, which uses long-range radios to give rural communities warning of the LRA’s location for evacuation purposes. The organization is also working to rehabilitate former child soldiers.

KSU Invisible Children held a fundraising dance party at 157 Lounge Friday, April 12 to raise money for these rehabilitation centers. A portion of the proceeds collected will be sent to Central Africa.

Looking ahead, Mehta said Invisible Children has no plans to dissipate.