The Vagina Monologues’ entertains and informs on ‘taboo’ topics 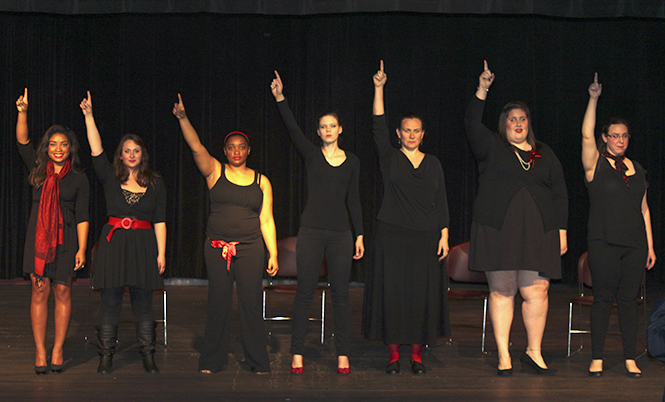 According to eveensler.org, “The Vagina Monologues” is an Obie Award-winning play by Eve Ensler that covers a wide range of “forbidden” topics to raise awareness about violence against women and girls. The show included an introduction, 14 monologues and seven actresses. The hope was that this play would give the audience a better understanding of and appreciation for the female body.

All of the money raised from the show was donated to Townhall II’s Victim Services department, the Portage County Rape Crisis Center. According to townhall2.com, Townhall II is dedicated to promoting “the health, wellness, and recovery of individuals and communities through prevention, education, advocacy, intervention, and treatment.”

Jennifer O’Connell, education intervention coordinator for the Sexual Assault Response Team, has been involved with the show from the beginning. She said it was inspiring to witness the student interest throughout the course of the planning and preparation of the production.

“It was brought up as a possibility by a colleague and once we became involved with One Billion Rising which took place in February, we decided to move forward and carry that momentum into ‘The Vagina Monologues,’” O’Connell said. “It was amazing to see the interest from students to get involved from the very beginning. Every step of the way people were coming out of the woodwork to help.”

Roxie Patton, program coordinator of the Lesbian, Gay, Bisexual, Transgender and Queer Center, served as director of the play. She said that she was glad to be able to apply her experience in the performing arts.

“It was fantastic getting to use my theatre degree again, especially working with a show like ‘The Vagina Monologues’ where I could combine my two passions: social justice and the performing arts,” Patton said.