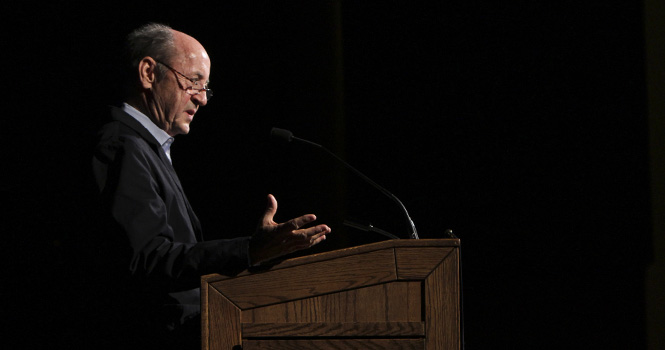 Billy Collins recites some of his poetry in the Ballroom of the Student Center on Thursday April 18, 2013. Collins has been named Poet Laureate of the United States from 2001 to 2003. Photo by Shane Flanigan.

Stuck in O’Hara Airport in Chicago for several hours, Billy Collins, U.S. Poet Laureate, waited for a plane with no fuel and no crew. When the crew went to get the fuel, the fuel tanks were flooded.

“It rained four inches in 10 minutes in Chicago,” Collins said. “I’m just kidding. Someone said ‘Oh my god,’ but I like a gullible audience.”

Although he missed his question and answer session Thursday morning, Collins read several of his poems at the second annual poetry reading hosted by the Kent State University Library in the Student Center Ballroom.

Collins commented on seeing scantily clad students dancing around campus in the warm weather, which he said was “because it is a thaw of some kind,” so he started with a poem called “Today.”

“If ever there were a spring day so perfect, so uplifted by a warm, intermittent breeze that it made you want to throw open all the windows in the house … well, today is just that kind of day,” Collins read.

His poem “Cheerios” elicited laughter from the audience as Collins poked fun at his own age.

“One bright morning in a restaurant in Chicago as I waited for my eggs and toast, I opened the Tribune only to discover that I was the same age as Cheerios,” Collins read. “Indeed, I was a few months older than Cheerios for today, the newspaper announced, was the seventieth birthday of Cheerios whereas mine had occurred earlier in the year.”

Dylan Sonderman, junior English major, said he enjoyed hearing Collins read “Cheerios” and had been looking forward to seeing Collins since he found out he was speaking at Kent State.

“I’ve had his books checked out from the library for a long time now,” Sonderman said. “Like, whoever has wanted to check them out, they’re probably like, ‘Who is this guy that’s got all of his books checked out?’ They’re actually due today. It’s kind of funny that they ended up being due on the day that he was here. But I’ll renew them again if I have to.”

Collins said he usually has two or three poems he tries to end with, but that he hadn’t planned on finishing his reading with the poem “On Turning Ten,” a poem told through the point of view of a 10-year-old boy seeing the end of his imagination.

Alana Mercurio, sophomore creative writing major from Malone University, traveled 45 minutes to see Collins speak and was so happy to hear him read “On Turning Ten.”

“I just love his language,” Mercurio said. “The last stanza is my favorite. I feel like the imagery is so amazing.”