PRIDE! Kent strengthens its family and others’ 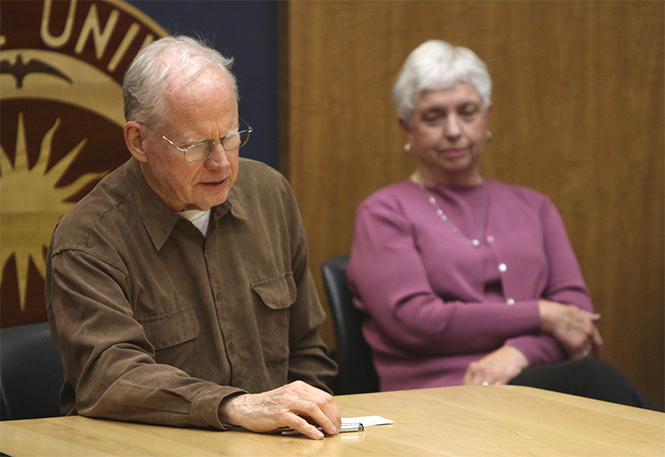 A guest speaks as PRIDE! Kent members host the Akron PFLAG Club in the Governance chambers Thursday night, April 25, 2013, discussing what it is like to be a supportive parent to an openly gay family member. Photo by Emily Lambillotte.

Students in PRIDE! Kent and their friends and family members learned ways to strengthen their families and relationships Thursday night.

PRIDE! Kent hosted the Akron chapter Parents, Family and Friends of Lesbians and Gays at 8 p.m. in the Governance Chambers of the Kent State Student Center to educate attendees on ways to be an effective supporter of the LGBTQ community. The event included a PowerPoint presentation on the do’s and don’ts of being a good ally and a five person panel from PFLAG to share their stories, offer information and answer questions.

Bill Libby, vice president of PFLAG, said PFLAG works to provide a family for those who feel as though they lack an accepting biological one.

“For PFLAG parents, we are the surrogates for you folks and for those people whose parents don’t accept who you are,” he said.

Ed Kancler, member of the executive board of PFLAG, said how important it is to not let sexual orientation affect the love a parent has for their child.

“The goal is to give the kind of support where the love you have for your kid before he or she came out continues to be the love for that kid because that [sexual orientation] wasn’t the matter of choice; they were created that way,” he said.

Brian Peshel, sophomore computer sciences major, said that he now wants to attend a PFLAG meeting and has a better idea of how to “come out” to his parents.

“Tonight made me learn how to come out to them [my parents], if possible,” he said. “I actually want to go to a PFLAG meeting now because they seem very interesting in my mind.”

Brandon Stephens, sophomore criminology and justice studies major, said that PFLAG is a great example that there are accepting people in all generations.

“A lot of the time, we see that it’s maybe the older generation who don’t support us, but what we saw tonight is there are good people everywhere, in all generations,” he said. “It’s just important to remember that the fight for equality began with them and continues with us.”