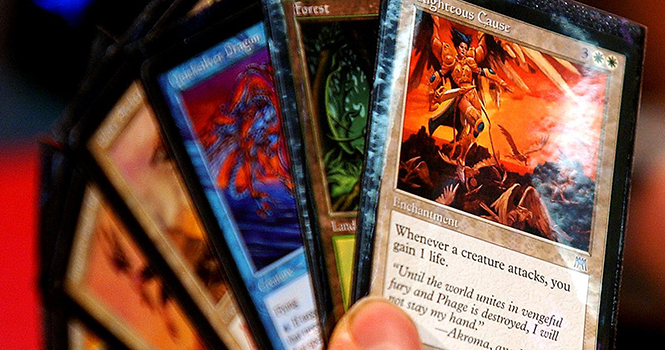 Jon Finkel holds his cards at the Magic The Gathering Pro Tour at the Hyatt Regency in Chicago, Illinois. Photo courtesy of MCT campus

Planeswalkers, or wizards with the ability to travel to different planes of existence, gather to cast out creatures, lands, enchantments and artifacts. An epic battle takes place between two or more planeswalkers. In order to win a battle, one must use strategy, cast worthy spells and have an understanding of the rules.

This is the concept of Magic: The Gathering, a trading card game played by millions since 1993. At Kent State, a group gathers at Suite A between Beall and McDowell Halls each Thursday at 8 p.m. to compete. Players come equipped with decks they use to cast different cards in attempt to eventually defeat their opponents.

Jon Demharter, sophomore zoology major, is president of the Magic: The Gathering Community and said the group consists of experienced players as well as beginners.

“Anyone here is willing to teach new players,” Demharter said. “We appreciate new players rather than playing with the same people every week.”

Jacob Reid, sophomore integrated language arts major, has been involved with the community for two years and has been playing Magic for about nine years. He has also played outside of the community at large tournaments.

“People pick cards to make a deck,” Reid said. “Then you play with that deck to see who makes it to the top, and there are usually prizes.”

Building a deck is important when it comes to winning a round. Players build decks depending on what they want to get out of the game. Both Demharter and Reid said they like using casual, fun decks.

“Generally, I like to switch it up,” Reid said. “All of my decks do something cool or stupid and hilarious. I don’t like to do the same thing in one game then in the next game. It becomes predictable.”

Each card has a certain color and can contain things like creatures, sorceries, enchantments and lands. Players use strategy to build their decks, but building a deck specifically to win can be pricey. Some valuable or rare cards can cost more than $100 per card. Most often, expensive decks make the best decks.

Reid said he had a bad experience playing against an opponent at a tournament with a valuable deck. He spent $80 on a deck while his opponent said he spent $125.

Although Magic is a strategic game, sometimes an expensive deck can override skill.

“You will most definitely win more with an expensive deck,” Demharter said. “More expensive cards make a deck better and more consistent. You get what you need when you need it. It’s all around better.”

Joe Adams, senior theatre major, said he has been playing Magic for about a year and has spent $400 to $500 on cards.

Demharter said, overall, it doesn’t matter what deck people use, as long as they enjoy playing with it. The game is meant to be fun, even though it can be competitive.

“It’s a nice hobby to have,” Adams said. “You can meet more people and actually interact with other people instead of playing a game online.”