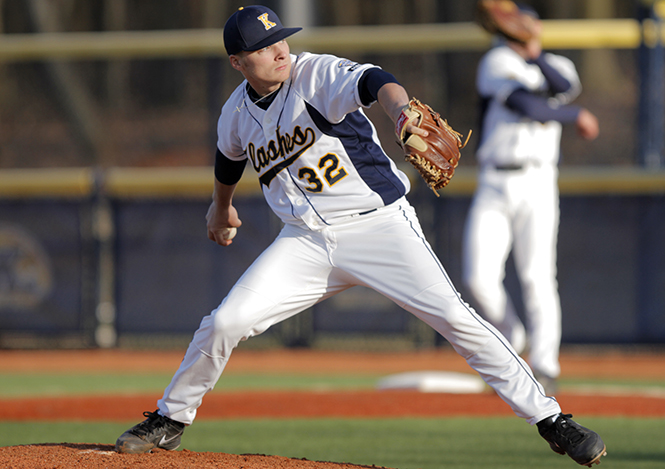 Kent State freshman Nick Jensen-Clagg pitches during a game against Penn State on April 3. The Flashes won the game 10-0. Photo by Melanie Nesteruk.

Wins against Toledo and Penn State earlier in the week have put the Kent State baseball team in a position to get above .500 in the win-loss column for the first time this season.

Ohio comes into the series winning two of their last 10 games. The Bobcats have yet to win a series and are coming off a 15-10 loss Tuesday to Xavier.

The Flashes are coming into the series after playing one of their most complete games as a team this season, a 10-0 win over Penn State in which pitcher Nick Jensen-Clagg nearly threw a perfect game.

Head coach Scott Stricklin said Ohio is a young team still trying to establish an identity after hiring a new coach in the offseason.

“I think what you’re going to see with OU is that they’re going to play and just put as much pressure on us as possible,” Stricklin said.

He added that Ohio will try to hit and run, steal bases and add pressure to the Flashes.

For Kent State to be successful in the series, they will have to contain first baseman Jake Madsen. The sophomore is hitting .343, with 20 RBI, 16 runs scored and two homeruns. Stricklin called Madsen Ohio’s best player.

“We always have a scouting report. [When] we look at a guy that we’re going to try to not let beat us, it’s going to be Jake Madsen,” Stricklin said.

Kent State has four regular starters hitting above a .300 average with a fifth hitting .298. That should provide a favorable match-up against an Ohio bullpen that has allowed opponents to hit .319 with 195 runs scored.

Right fielder T.J. Sutton believes the upcoming series this weekend will provide the Flashes with an opportunity to pull further ahead in the conference.

“It’s really big to get ahead [in the conference],” Sutton said. “OU is always a solid team. It’s always a good series.”

Stricklin knows for the team to be successful, they will have to ignore the things out of their control.

“What we try to concentrate on is what we can control,” Stricklin said. “[Ohio is] going to have energy, but as a team, Kent State has to worry about Kent State. We’re just going to worry about doing our jobs: throwing strikes, catching baseballs and having good at-bats. If we do that, we feel like we’re going to have a really good chance at winning the series.”

Despite Ohio leading the all-time record with 92 wins to 70 losses, Kent State swept the Bobcats last season. The Bobcats have not beaten the Flashes since an 11-3 victory in 2010, according to the Kent State Athletics website.