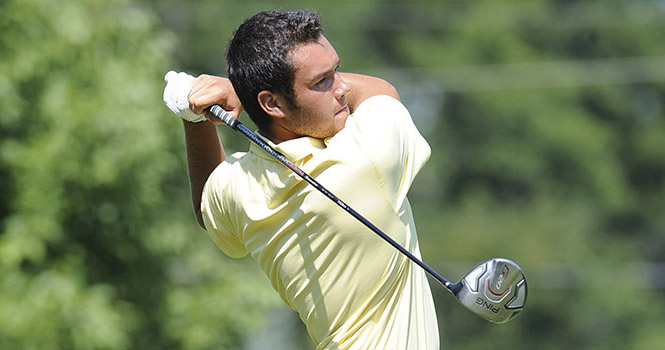 The Kent State men’s golf team closed out the regular season tournament with a sixth-place finish Sunday at the Boilermaker Invitational hosted by Purdue in West Lafayette, Ind.

The Flashes competed against a field of 18 teams including Akron, Miami and Toledo, all of whom they will face in the upcoming Mid-American Conference Tournament. Kent State was the highest-ranked team in the tournament, but failed to make a presence in the first round.

“We just had two unbelievingly bad holes the first round [and] we got so far behind,” Flashes head coach Herb Page said. “But I give my guys credit; we hung in there [during] the second round.”

The par 72, 7,465-yard course proved challenging, as the Flashes entered the second round in 13th place, trying the erase the mistakes of the lack-luster first round.

“We literally had one bad hole,” Page explained. “We stood up on a par three and hit five balls in the water and played the hole eight over par. One hole.”

The team had catching up to do in the second round but adjusted quickly. All players improved their game, dropping 14 strokes and moving into 10th place heading into Sunday’s final round.

“I’m really proud of how we played today, just went in there and got the lowest score by a bunch and played very well,” Page said.

With Akron just three shots behind in the final round, nipping at the Flashes’ heels, Kent State buckled down and climbed up into the eighth spot on the leader board.

Taylor Pendrith led the way for Kent State through all three rounds, with the highest being a one over par in the first round. Pendrith finished tied for third with a 215. Junior Corey Conners finished close behind him in ninth place with a two over 218.

Conners was happy with the way he and his team pulled it together in the final round.

“We definitely played better [Sunday] than we did [Saturday],” Conners said. “I didn’t hit the ball quite as good as I know I can, but I was still able to score pretty well and get us out of trouble.”

A clutch final-round performance by both Kyle Kmiecik and Ryan Troyer propelled the Flashes into the sixth place spot to tie with Indiana. Kmiecik finished 45th with a 229 while Troyer played his best round and tied for 50th with a 230.

Sophomore Nick Scott shot a 231 and finished tied for 55th place to close out the tournament for the Flashes.

With a week off, Kent State will prepare to play in the MAC Tournament with hopes of winning its fifth consecutive title.

“I’m just going to hit a bunch of golf balls and try to get my swing a little bit better and hit more solid shots,” Conners said.

As for Page, he is confident that his players are ready to take on their conference foes.

“We control our own destiny in the MAC,” Page said. “We just have to play up to our level.”

Meghan Blaha is the men’s golf reporter for the Daily Kent Stater. Contact her at [email protected]