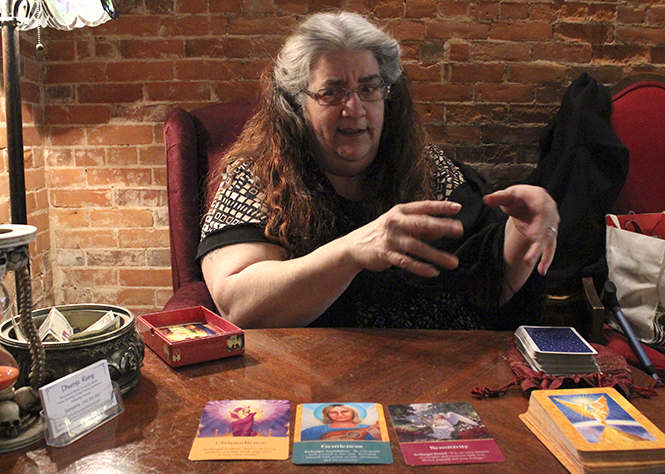 As the door to her home opened, a lingering smell of cigarette smoke and incense escaped into the warm wind outside. Samantha Wilmoth, a spiritual guidance reader, leaned on her cane as she closed the door behind her.

She led the way through a small room lit by blue window light. Dry herbs hung in bundles, and knick-knacks and earthy-colored decorations scattered every tabletop.

She sat behind a desk and placed her hands on the only wood clearing. She prepared to demonstrate one of her psychic readings.

“You have a lot of blue radiating off of you,” Wilmoth said. “That means you are empathic.”

Wilmoth has been involved with spiritual guidance for more than 30 years. Aside from working at The Empire of Magical Thought in Kent, Wilmoth meets clients at her home, restaurants or anywhere they are comfortable to provide spiritual readings.

Though she does provide readings for students, she said she works with men and women of all ages, and even a voodoo priestess at one point.

Wilmoth grew up in Akron, Ohio. As a child, she recalls her spiritual connection. However, she said the era she was raised in frowned upon the spiritual realm. When Wilmoth verbalized her spiritual experiences, her elders often advised her to be quiet or blamed her imagination.

“All of us have these capabilities,” she said. “Some are born more open than others, but that doesn’t mean they’re any better. They were just born that way.”

“A basic reading is where we take a snapshot of where you are today,” she said. “We look at the strongest influences and the main fulcrum you’re at during that point. We ask: What’s causing things to happen in your life? And what choices do you have?”

Short readings cost $10 and last about 15 minutes. Empire offers these readings inside the shop. During a short reading, Wilmoth’s goal is to strengthen people in gathering information to make decisions for themselves.

“Always make sure that you’re at the center of what you’re doing,” Wilmoth said.

Wilmoth also works with tarot cards, which she spread across a table in an arc.

“Run your hands over the cards,” Wilmoth said. “You’re looking for change in temperature or even a tingling. Trust your instinct, and use your left hand.”

Wilmoth explained the left hand is connected to the intuitive side. Those who get a reading may feel that the card they select is relevant to their lives in some way.

“What one card means for you can mean something completely different to someone else,” Wilmoth said. “Cards are a tool for you to communicate with your higher self.”

While some readings can leave customers feeling empowered through Wilmoth’s spiritual guidance, others may cause an emotional reaction.

“I see a lot of people walking out of here crying,” Empire supervisor Jenifer Jeney said.

“Sam does a reading and there are tears flowing — smiling with tears running down their face. It’s validating for some of them.”

Wilmoth said she is often able to see and feel spirits during readings. There are many instances, she said, when lost loved ones — or even a pet that passed away — come through for someone.

Josh Cramer, junior communication studies major, said he thinks, for the most part, readings are coincidental.

“It really just depends on your belief in spirituality, I suppose,” Cramer said. “I think readings can be therapeutic if a person believes in them; it can be a comfort zone. But not so much to the point they believe everything in their life revolves around fortune telling.”

“I think it serves a therapeutic purpose, just as much as the entertainment side of it,” Jeney said.

Melissa Kollar, junior public relations major, said it is intriguing to get insight into your life from a third party.

“It seems as if it would be therapeutic because of the different perspective,” Kollar said. “It could allow you to rise above your day-to-day issues and look at your life in a new way. That can be calming to anyone.”