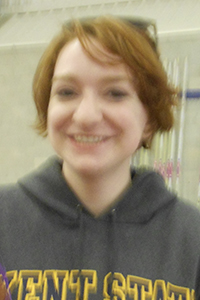 Relay for Life at Kent State raised more than $56,000 during the 24-hour community walk held on Saturday in the Kent State Field House.

About 1,200 participants on 54 teams helped to raise money and walk for the event. According to the Relay for Life at Kent State’s official page, the goal of the event was to raise $79,000. Brenynn Butler, vice president for Colleges Against Cancer and senior hospitality management major, said the Relay for Life committee plans to continue its efforts to fundraise through August. She said final totals will be calculated then, and they will start to coordinate teams for spring 2014.

John said much of the efforts were done with fundraising events and partnerships.

“We did a partnering project with Sound Fest, which is the end of Living Arts Week in Verder Hall,” John said. “We had art-related fundraisers where you could donate to tie-dye or make a mask.”

“This year, this is the first time it has been in the Field House,” Butler said. “It worked a little bit differently this year. We have gotten a little bit more organized with some things [in the past few years]. We increase our goal every year and have met it.”

Mandy Schneider, junior integrated health studies major and co-event chair, said that one of the biggest changes in this year’s event was the location change.

“Last year it was kind of interesting because it was outside,” Schneider said. “I was really excited this year with it being inside [and] not having to worry about the weather because that was our biggest worry.”

Maggie Reinmann, senior educational studies major and co-event chair, said that she felt the event went well, but they can learn from this year for next year.

The Relay for Life committee will continue its efforts until August, Butler said. Following that, she said that they will begin to coordinate teams for the upcoming year in September.

Participants share their reason for participating in Relay for Life

More than 1,000 participants gathered in the Field House for Kent State’s Relay For Life Saturday, April 27.

Relay For Life is an opportunity to honor cancer survivors, remember those lost and raise awareness and funds for cancer research. It is an organized community fundraising walk promoted by the American Cancer Society that began in 1985.

Each participant had his or her own special reason for attending the event, whether it was losing a family member to cancer, having a friend or relative who survived cancer or surviving cancer themselves.

For some students, Relay For Life was a way to honor family members or friends who battled cancer and survived.

Emily Trautmann, freshman middle childhood education major, said she was walking in honor of her stepmother who is a cancer survivor.

Trautmann said a few years ago, her stepmother was diagnosed with colon cancer, but by the time the doctors found it, it had spread. She said her stepmother has been cancer-free for years now.

“She didn’t have much of a chance,” Trautmann said. “[But] she managed to persevere.”

Others participated in honor of multiple family members and friends who have been affected by cancer.

Ally Snyder, senior special education major and Colleges Against Cancer president, said both her aunt and her cousin are cancer survivors.

Snyder said after undergoing chemotherapy, her aunt has been cancer-free for six years.

Snyder’s cousin was diagnosed with Ewing’s sarcoma, a rare type of bone cancer, when they were both seniors in high school.

“It hit close to home to have someone the same age as you diagnosed,” Snyder said.

She said she was also participating in Relay For Life in honor of a close family friend who is currently battling cancer.

Some students participated in the event because they were diagnosed with the disease.

Michael Fortuna, junior technology major, was diagnosed with testicular cancer when he was a senior in high school.

Fortuna was a runner and wrestler in high school and said one morning he was at practice and was in a lot of pain.

Fortuna said it was three days before his family was supposed to go to Hawaii when he was taken to the emergency room. The doctors did an ultrasound and found a black mass.

“I was shocked,” Fortuna said. “You just think, ‘How could this happen to someone so healthy?’”

Fortuna underwent surgery at the Cleveland Clinic and has now been cancer-free for three years.

Other students, such as Brooke Owen, sophomore American Sign Language major, said they were participating to honor the memory of someone who lost their battle with cancer.

Owen’s uncle died from lung cancer, but she said it wasn’t discovered until he was in stage four.

She chose to participate in a 24-hour-long walk, only stopping for small breaks throughout the day and night.

Cola said he had participated in Relay for Life for many years over the course of his father’s disease.

“I think about my dad every day,” Cola said. “I just try to live my life the way I think he would want me to. I just want him to be proud of me for everything I do.”

This year, Cola took on the role of team captain for his fraternity, and the team raised more than $2,000 for the cause.

“Relay for Life is the thing I’m most passionate about,” Cola said. “I hope one day they find a cure so no one has to lose their father like I did.”