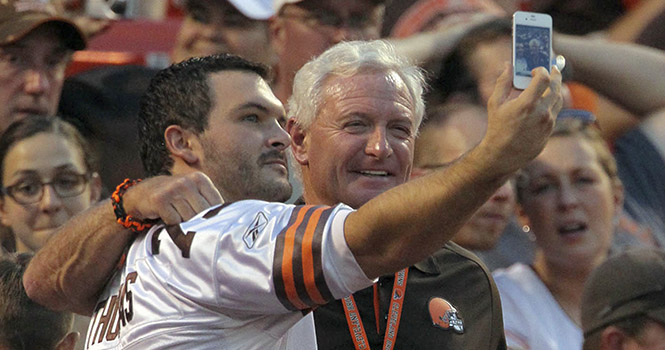 There’s a saying that is common in the city on the southern shores of Lake Erie: “Only In Cleveland.”

That phrase, which I have uttered countless times during my life, has followed the news of Carlos Boozer choosing money over Cleveland, LeBron James leaving the Cavaliers, Kellen Winslow Jr. being hospitalized with an unusual staph infection and so on.

It again left my mouth on Monday afternoon.

Shortly after news broke of the explosions at the Boston Marathon, another surprising story came out of Knoxville, Tenn. Pilot Flying J, the company led by Browns owner Jimmy Haslam III, was being raided and locked down by the FBI and IRS. For those of you who didn’t comprehend what happened, the FBI is investigating a billionaire NFL franchise owner. And of course, it’s the owner of the Browns.

Details are unclear about the investigation, and Haslam has issued a statement expressing full confidence in his company’s business procedures, which, of course you would do if you were the owner of what some consider the largest private company in the country. But either way, this is bad – really, really bad – and definitely not the way he or any of the Browns’ loyal fans wanted to start 2013.

It also confirms my learned notion that professional sports in Cleveland are cursed for all eternity, or in the words of ESPN’s Bill Simmons, God hates Cleveland.

It’s that time again, where the column turns into a fashion piece, and I break down uniforms.

With the advent of baseball season just past us, new uniforms have debuted as they do nearly every season. Let’s start with the Houston Astros’ new threads.

Orange and blue make their return from the Astrodome era, but in a newer – and much duller – manner. The old H with the star in the background is nice, but the rest of the uniform leaves plenty to be desired.

One uniform that might be old — but in a vintage way — is the Pittsburgh Pirates’ Sunday throwbacks. The Buccos pulled out the 1970 home white pullover-style uniforms and mustard yellow caps for Sunday games, and unlike other teams, executed the throwback to perfection. The jersey is a pullover, not button-down, and something about that cap really intrigues me. I’m an Indians fan, but my girlfriend is from western Pennsylvania and is a Pirates fan, so there’s my excuse to buy one and potentially wear it to a Pirates game. I can almost hear my Pennsylvania-native friends chiding me now.

Speaking of weekend alternates, let me just say that the Indians’ cream home uniforms were growing on me with the switch to mainly red trim, until they decided to remove Chief Wahoo from the helmet. Step by step, they are slowing eliminating the beloved Wahoo from all traces of team identity, minus the caps. Politically correct or not, this is not good.

Rounding out the uniform talk, we jump back onto the nation’s favorite field, the gridiron, to take a look at North Carolina’s new uniforms. The addition of black is nice but way overdone, and I was hugely unimpressed with the new sets until I watched the hype video for them. No, the music and cinematography didn’t convince me – I watched it with the sound off. It was instead the wide variety allowed with the different uniform combination possibilities, and finally, a team will trot out an all-black look accented by powder – err, Carolina – blue, my all-time favorite uniform color. Those are as clean and sleek as they get.

If you didn’t check out my last column that ran online – I posted it at 2:30 a.m. last week – I covered five things I learned from the NCAA Tournament, including how letting your significant other pick a region in your bracket might actually produce a world’s nations tournament bracket with traditional 1-16 seeding. Email or tweet me your favorite hypothetical match-ups. Who do you have as the favorite 5-12 upset? France over Russia?

Also, in an effort to get a mailbag started – those columns are always the most entertaining – email or tweet me your favorite uniforms.

Don’t forget to tune into “Sports With Shook” on Fridays from 2 to 4 p.m., only on Black Squirrel Radio. You can search the show on Facebook to find our most recent show in its entirety, available for you to listen right now.