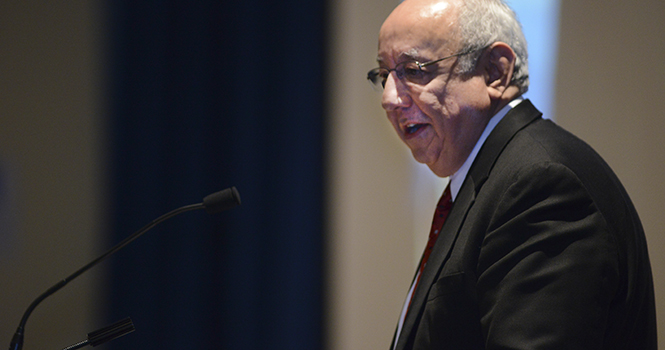 Resident Commissioner Pedro Pierluisi, who is the sole representative of Puerto Rico in Congress, prepared to speak at a panel in the KIVA on Friday afternoon. Pierluisi discussed the legitamacy of Puerto Rico becoming the 51st state in the United States. Photo by Jacob Byk.

Juan Andrade Jr., president of the United States Hispanic Leadership Institute located in Chicago, and Pedro Pierluisi, Resident Commissioner of Puerto Rico in Congress, took turns taking the stage in the Kiva. The aim of the conference was to inform attendees of the growing trends in the Hispanic population and to encourage organizations to increase the level of diversity within their own groups.

Andrade spoke first about the socioeconomic and political role of Latinos in the United States.

“Just in 30 years, America is going to reach a very historic point where it has never ever been before,” Andrade said. “And that is, the demographers tell us today that 30 years from now for the first time in our history there will be no ethnic or racial group majority in this country.”

He also gave words of encouragement to attendees who are in the process of achieving their goals.

“The more we understand about ourselves and each other, the better off we will be as a nation. Do not become a victim of your circumstances. Rise above them,” Andrade said. “If you don’t have a role model, become your own role model. Set the standard. The key to believing in yourself is philosophy.”

“Andrade’s speech was phenomenal,” Garcia said. “I mean his message about understanding the growth of the demographics of all ethnic groups and what the really means and why we should care about that.”

Garcia said that Andrade’s lecture not only touched the students, but faculty and staff as well, including himself.

“I think what the students are going to hear is finish what you start,” he said. “It’s a great philosophy. I was inspired because I’m working towards my Ph.D. and there are days when I want to give up, but I’m not a quitter. And this reinforces for me that it’s worth it. Don’t quit.”

“Very inspirational,” Rodriguez said when describing Andrade’s speech. “I would definitely recommend it to everyone else.”

Pierluisi spoke second about the possibility of Puerto Rico becoming the 51st state. He believes that statehood is the next logical step for Puerto Rico.

“I am a statehooder,” he said. “Independence would break all of the strong economic, political and social bonds that have formed between Puerto Rico and the United States.”

He stressed that the quality of life would be drastically different if Puerto Rico does not become a part of the United States.

“Free association would substantially weaken the quality of life,” Pierluisi said. “Statehood would perfect our union.”

Sandra Morgan, outreach program director for the College of Arts and Sciences, assisted in bringing Pierluisi to Kent State and said she was pleased with the conference as a whole.

“I thank Dave Garcia for organizing Hablemos in the first place because it’s an opportunity for civic engagement and conversation, which is marvelous,” she said. “I think that just in looking at the faces of the students in the room they were very much engaged and really interested in the conversation.”

Morgan believes that it was a beneficial program to have on campus.

“I think that students should number one keep an open mind and recognize that Puerto Ricans are U.S. citizens,” she said. “I think it’s an opportunity really to think of ways that we can connect to our neighbors.”