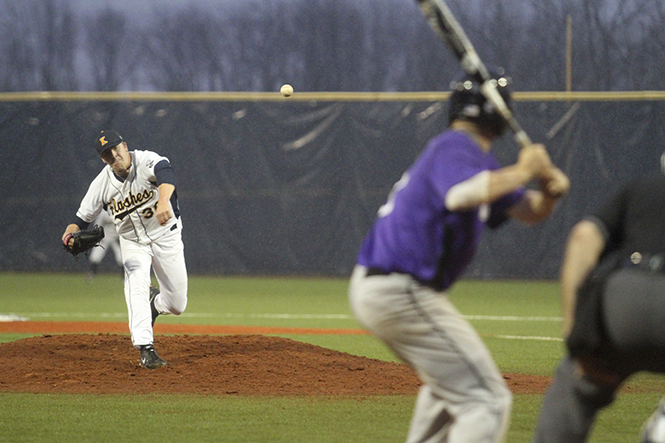 Sophomore Pitcher Brian Clark throws against Niagara at Schoonover Stadium on Tuesday, April 16. The Flashes swept the Purple Eagles with a score of 19-1, and will face them again Wednesday at 5:00 p.m. Photo by Brian Smith.

The Flashes (18-16, 9-3 Mid-American Conference) earned their fourth straight win, their longest winning streak of the season, with a 19-1 victory over Niagara (12-23, 7-5 Metro Atlantic Athletic Conference) Tuesday at Schoonover Stadium.

The pitching duo of Spencer Bryant and Dan Slavik held the Purple Eagles to one hit through three innings until the offense came around. Salvik (1-0) earned the win after the Kent State offense scored 13 runs between the third and fifth innings.

“I thought our guys threw the ball really well,” Stricklin said. “I’m very pleased with the way those guys pitched. Every single guy that went on the mound, I thought, threw the ball well today.”

Flashes’ third baseman Zarley Zalewski drilled a three-run home run in the fifth inning. Zalewski had quite a day at the plate, hitting 2 for 3 with three RBI and four runs scored.

“It felt pretty good,” Zalewski, a freshman, said of his second home run of the season. “As soon as I hit it, I felt like I got a pretty good piece of it and it ended up going out.”

The only threat from Niagara came when first baseman Ryan McCauley scored on an error hit by Kevin Paulsen in the sixth inning, cutting the Kent State lead to 13-1. The Purple Eagles never got into a rhythm as the Flashes pitched well enough to hold them to one run on three hits.

Kent State has never lost to Niagara. The win gives the Flashes a seven-game winning streak against the Purple Eagles dating back to the 2007 season.

Kent State finished with 19 runs on 14 hits and two errors. They were forced to do it without starting shortstop and leadoff batter Derek Toadvine, who most likely won’t be back with the team until Wednesday after the death of a family member.

“Derek’s a popular guy on this team and he’s a leader,” Stricklin said. “Not having him here is different.”

The Flashes and Purple Eagles will play again at 5 p.m. Wednesday at Schoonover Stadium.

Prior to Wednesday’s game, there will be a Dedication of Lights ceremony at Schoonover Stadium. The ceremony will recognize and thank everyone who made the addition of lights to Kent State’s baseball facility possible, according to Kent State athletics.